John Lasseter’s short film ‘Luxo Jr.,’ nominated for an Academy Award in 1986 for best animated short, is added to the National Film Registry of the Library of Congress. 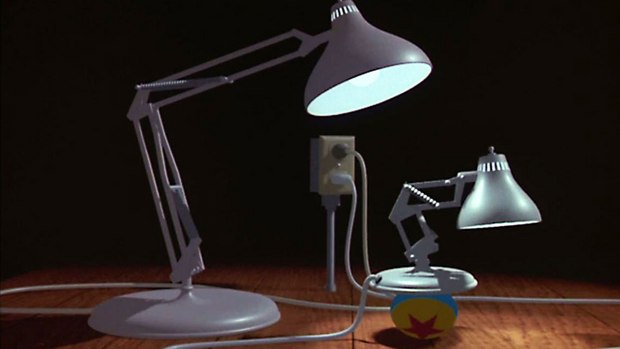 Among this year’s selections is Pixar head John Lasseter’s short film Luxo Jr., which was nominated for an Academy Award in 1986 for best animated short.

The iconic living, moving desk lamp that now begins every Pixar motion picture (from Finding Nemo to Monsters, Inc. to Up) has its genesis in this charming, computer-animated short subject -- the first CG-animated film ever to be nominated for an Oscar -- directed by John Lasseter and produced by Lasseter and fellow Pixar visionary Bill Reeves.

In the two-minute, 30-second film, two gray balance-arm lamps -- one parentally large and one childishly small (the "Junior" of the title) -- interact with a brightly colored ball. In strikingly vivid animation, Lasseter and Reeves manage to bring to joyous life these two inanimate objects and to infuse them both with personality and charm -- qualities that would become the norm in such soon-to-be Pixar productions as Toy Story, Cars and WALL-E.

Spanning 1913-2004, films named to the registry include Hollywood classics, documentaries, silent movies, student films, independent and experimental motion pictures. This year’s selections bring the number of films in the registry to 650 -- only a small fraction of the Library’s vast moving-image collection of 1.3 million items.

You can read the full press release, shown below:

The horrors of war, the heroism of sacrifice, a vaudeville pioneer, the devil and a master of the macabre represent the diversity of an elite selection of films recognized for their cultural, historic or aesthetic significance. Librarian of Congress James H. Billington announced today the annual selection of 25 motion pictures to be named to the National Film Registry of the Library of Congress. Selection to the registry will help ensure that these films will be preserved for all time.

“The National Film Registry showcases the extraordinary diversity of America’s film heritage and the disparate strands making it so vibrant,” said Billington. “By preserving these films, we protect a crucial element of American creativity, culture and history.”

Spanning the period 1913-2004, the films named to the registry include Hollywood classics, documentaries, silent movies, student films, independent and experimental motion pictures. This year’s selections bring the number of films in the registry to 650, which is a small fraction of the Library’s vast moving-image collection of 1.3 million items.

The documentaries and shorts named to the registry include Into the Arms of Strangers: Stories of the Kindertransport, a film examining the rescue operation that placed thousands of Jewish children with foster families in Great Britain prior to World War II; Felicia, a 13-minute short that showcases a Watts neighborhood through a teenager’s first-person narrative; and the 1980 Moon Breath Beat, created by animator Lisze Bechtold when she was a student at CalArts.

The silent films selected for preservation include The Dragon Painter, (1919) starring Hollywood’s first Asian star, Sessue Hayakawa; the 1916 social drama examining poverty and prostitution, Shoes; and Unmasked, the 1917 film directed and scripted by its star Grace Cunard. Also added to the registry are seven reels of untitled and unassembled footage featuring vaudevillian Bert Williams, the first African-American Broadway headliner and the most popular recording artist before 1920.

In 2013, the Library of Congress released a report that conclusively determined that 70 percent of the nation’s silent feature films have been lost forever and only 14 percent exist in their original 35 mm format.

Under the terms of the National Film Preservation Act, each year the Librarian of Congress names 25 films to the National Film Registry that are “culturally, historically or aesthetically” significant. The films must be at least 10 years old. The Librarian makes the annual registry selections after reviewing hundreds of titles nominated by the public and conferring with Library film curators and the distinguished members of the National Film Preservation Board (NFPB). The public is urged to make nominations for next year’s registry at the NFPB’s website.

For each title named to the registry, the Library of Congress Packard Campus for Audio Visual Conservation works to ensure that the film is preserved for future generations, either through the Library’s motion-picture preservation program or through collaborative ventures with other archives, motion-picture studios and independent filmmakers. The Packard Campus is a state-of-the-art facility where the nation’s library acquires, preserves and provides access to the world’s largest and most comprehensive collection of films, television programs, radio broadcasts and sound recordings.

Founded in 1800, the Library of Congress is the nation’s oldest federal cultural institution. It seeks to spark imagination and creativity and to further human understanding and wisdom by providing access to knowledge through its vast collections, programs and exhibitions.