“Whenever we get stuck at Pixar or Disney, I put on a Miyazaki film sequence or two, just to get us inspired again.” 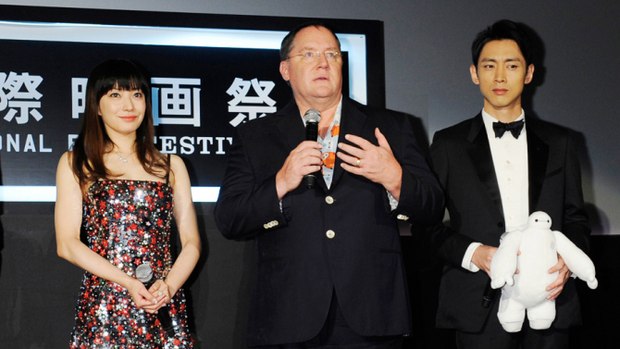 Delivering a special keynote presentation at the festival, Lasseter said, “Whenever we get stuck at Pixar or Disney, I put on a Miyazaki film sequence or two, just to get us inspired again.”

Lasseter was invited by the festival to discuss the concept of “Cool Japan,” the Japanese government's slogan for promoting the nation's culture industries. The two-time Oscar winner said he was initially unsure what to talk about, but soon realized it would be a particularly personal presentation, because of the “huge influence the country and people of Japan have had on my life and career.”

Lasseter, who began his career in the early 1980s as an animator at Disney following his graduation from the character animation program at CalArts, recounted how he was initially dismayed by the work the company was doing at the time, because he believed animation should tell stories that appeal to people of all ages, not just children.

While working at Disney, in 1981, Lasseter's team was visited by a group of Japanese animators from Tokyo-based studio TMS. Included in the group was Hayao Miyazaki, who had just completed his first animated feature, The Castle of Cagliostro. “I was absolutely blown away by this movie!” Lasseter said. “It had a very strong effect on me because I felt that this was the first animated feature film I had seen that had a vision to entertain for all ages. It made me feel that I was not alone in the world.”

Lasseter screened the car chase sequence from the film for the audience of several hundred, commenting that at the time it had fascinated him deeply and that he had watched it repeatedly. “I studied this sequence again and again and there was no way that that was made for kids -- it’s for every age group, for everybody!” he said.

“It’s smart, it’s clever,” he continued. “Part of the scene is animated background, part of it is just sliding painted background. The depth and the excitement…it was smart filmmaking.”

In 1985, when Lasseter first met his future wife, then Nancy Tigg, at a computer graphics conference, he invited her to his apartment and insisted on playing her the cassette of Miyazaki clips. “Luckily for me, she loved it,” he said, drawing laughs. “She's the love of my life. And I'm not kidding you, I wooed her with Hayao Miyazaki's first film. When I say Japanese animation has had a profound effect on my life, well, there's proof positive.”

Lasseter made his first trip to Japan in 1987, shortly after Pixar was founded, in 1986, he recalled. He said he had become preoccupied with the idea of making a movie about a toy that was alive, and while in Tokyo, he visited the tin toy museum of Japanese collector Kitahara Teruhisa.

“I spent a tremendous amount of time in there,” Lasseter said. “The details were so fantastic. They had this retro vintage nature that felt very fresh. I knew that this would look amazing in computer animation.”

His visit directly fueled his ideas for the short film he directed for Pixar, Tin Toy, which won the Academy Award for best animated short in 1988. The film was later developed and expanded into Lasseter's first feature, Toy Story.

During the same visit to Japan, Lasseter met a former employee of Miyazaki's now-legendary animation house Studio Ghibli and was able to arrange a visit. He spent several hours with Miyazaki and saw some of his early drawings for what would become the breakthrough feature My Neighbor Totoro (1988). Lasseter said he was struck by the warmth and personal expression that shone through Miyazaki's intricate hand-drawn approach to animated storytelling, and his subtle pacing and style of characterization.

“Years later, I always said at Pixar that you are what you direct,” he said. “Your heart and soul goes into everything you make -- I learned that from Miyazaki.”

As their friendship grew over the years -- and Lasseter acquired a towering reputation in the film business himself due to Pixar's string of early hits -- he decided to try to help Miyazaki reach a broader international audience.

“I wasn't happy with how the earlier films were brought over into English,” he said. “I wanted to protect his vision, so that English audiences would understand his films at the same level that Japanese audiences do.”

Beginning with Spirited Away (2001), which won Miyazaki the Oscar for best animated feature, Lasseter has assisted with the translation of the English-language versions of the films. He recounted one instance where he was struggling with how best to convey a sequence while staying true to Miyazaki's intent.

“I asked him which option he thought was best, and he said: 'John, I believe that if the American audience really wants to understand my films, they should all learn Japanese,” Lasseter recounted.

Throughout the keynote address, Lasseter showed clips from Miyazaki films and broke them down from an animator's perspective, detailing the various effects that still awe him.

“The most special Miyazaki film for me is probably My Neighbor Totoro,” he commented. “My Neighbor Totoro touches the audience so deeply which has a profound effect on the young and the old.”

Especially moving for Lasseter is the sequence where Mei and Satsuki are waiting at the bus stop for their father to return. “Hayao Miyazaki celebrates the quiet moments in films,” he explained. “In this sequence, all the time it takes to lead up with these gorgeous screenshots, where virtually nothing is happening, are so special.”

But what Lasseter loves the most is the magic in Miyazaki’s films. “The cat bus in My Neighbor Totoro is a cat, and that’s very cool. But then the door opens and it’s a live creature! And later in this sequence when Mei and Satsuki climb in the creature closes up around them…well yes! That’s what a seat inside a bus that is actually a cat would be like, if there was one! And the little mice that hang on to the cat bus are lights! It’s just magnificent,” he said.

“I think my entire career is founded upon an idea I discovered in Japan: keeping one foot in tradition, heritage, and the fundamentals of classic design and then applying that to cutting-edge technology,” Lasseter concluded. “That's one of the secrets of Pixar.”