SPARK FX and 3D [FWD] merge into SPARK [FWD], bringing together leading industry experts with professionals, students and film fans for a one of a kind, five-day event. 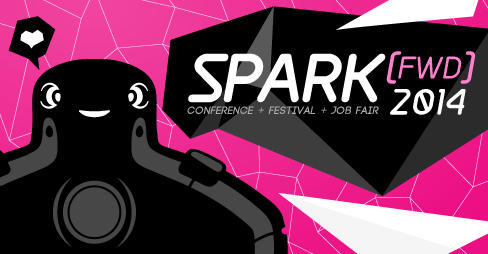 VANCOUVER, BC — SPARK FX and 3D [FWD] are merging into SPARK [FWD]. Using momentum from five years of events, SPARK [FWD] brings together leading industry experts with professionals, students and film fans for a one-of-a-kind, five-day event which includes a job fair connecting employers with perspective employees, a conference portion in which industry, students and the public partake in presentations from leading experts in the industry, and a film festival which showcases some of the best from the past and present of visual effects, stereo 3D and advanced imaging.

For 2014, SPARK [FWD] is proud to showcase an exciting and diverse program. Running from Wednesday, February 5th until Sunday, February 9th, the event will showcase the most recent developments in the VFX and advanced imaging (3D, high frame rate, 4K) arenas. The event opens on Wednesday, February 5th with a presentation from author and longtime Batman executive producer Michael Uslan, who will share his experience acquiring the rights for the caped crusader and the long road to production on the classic Batman through 20+ years into Christopher Nolan’s successful The Dark Knight Trilogy. As an expert in the field of comic books, Mr. Uslan created and taught the first accredited college course on comics, and as a lifelong fan of Batman Mr. Uslan will bring his passion and love of comics and film to Vancouver. A special 25th anniversary screening of Tim Burton’s 1989 critical and box office hit Batman will follow his presentation.

Leading the conference that features presenters who have shaped and changed the industry with their work is John Knoll, Chief Creative Officer of Industrial Light and Magic. Co-creator of Adobe Photoshop, Mr. Knoll is best known for his work in the field of visual effects, a career that has spanned three decades and encompasses a number of benchmark projects including James Cameron’s The Abyss and Avatar, the Star Wars prequels and a number of the Pirates of the Caribbean titles, winning an Oscar for his work on Pirates of the Caribbean: At World's End.

This year’s festival will also include a 20th Anniversary screening of Steven Spielberg’s Jurassic Park in 3D on Saturday, February 8th. Mr. Spielberg’s film did not only awe audiences, it pushed the technical envelope, winning a number of prestigious awards including the Oscar for Special Effects. The film has recently been re-released with polished visual effects and a 3D conversion prior to the slated 2015 release of the new Jurassic World.

On Sunday, February 9th SPARK [FWD] will present a 75th Anniversary screening of Victor Fleming’s long standing classic The Wizard of Oz 3D. The newly re-mastered film was carefully pieced together from seven original sources, providing the best resolution of any previous release and has been heralded by many and one of the 3D highlights of 2013.

The conference and festival will close with a very special 60th Anniversary monster triple bill including Walt Disney’s Oscar winning 20,000 Leagues Under the Sea starring Kirk Douglas and the late James Mason, Creature From the Black Lagoon 3D and House of Wax 3D.

The Vancouver International Film Centre will be temporarily outfitted with the very best in 4K projection from Christie Digital, with a 3D system provided courtesy of XPAND 3D. Both systems together offer the brightest and best resolution of 2D and 3D content, and are HFR (High Frame Rate) ready.

A complete list of speakers and the schedule will be available soon, with presentations from yet to be released projects, industry leaders, and featuring new creative and technical concepts. Passes are now available at SparkFX.ca