Never-before-seen exhibition curated by award-winning independent animator, historian, teacher and author John Canemaker delves into the artistic process behind one of the most influential animated films in history. 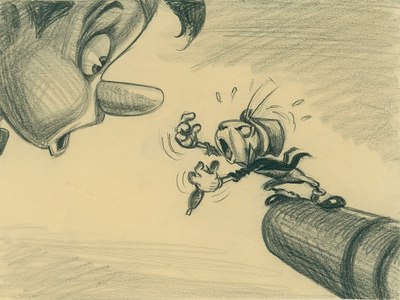 The Walt Disney Family Museum is presenting a new exhibit, Wish Upon a Star: The Art of Pinocchio. On view from May 18, 2016 to January 9, 2017, this never-before-seen exhibition created by the museum allows visitors to discover the artistic process and step behind-the-scenes to explore how one of the most influential animated films in history was produced: Walt Disney’s 1940 feature-length masterpiece Pinocchio.

Guest-curated by John Canemaker -- an Academy Award, Emmy Award and Peabody Award-winning independent animator, animation historian, teacher, and author -- this immersive exhibition invites the visitor to experience the production processes of the pre-digital era, providing a glimpse into how legendary animators worked and thought. Pinocchio inspired advances in character development and three-dimensional design, and the exhibition allows guests to enjoy the art created by the animators and designers of The Walt Disney Studios to create the stunning work featured in the film.

Featuring more than 300 objects, this unique, original exhibition takes a closer look at the settings, color, mood, character relationships, style, and costumes of this remarkable film, which has dazzled audiences for over 75 years.

Wish Upon a Star: The Art of Pinocchio is organized by The Walt Disney Family Museum and is being presented in the Diane Disney Miller Exhibition Hall from May 18, 2016 through January 9, 2017. Tickets are $30 ($25 for students and seniors, and $22 for children aged 6-17) and can be purchased here.