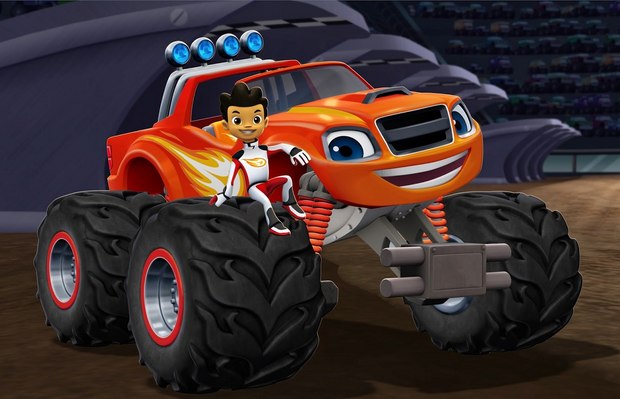 NEW YORK -- Nickelodeon’s Blaze and the Monster Machines heats up with special guest Joe Manganiello (True Blood) as the voice of the Fire Chief in “Fired Up!” premiering Friday, Sept. 25, at 12 p.m. (ET/PT). As commander of Axle City’s firefighting brigade, the Fire Chief tackles the toughest emergencies with authority and thinks Blaze may have what it takes to be a firefighter. Blaze and the Monster Machines follows the adventures of the amazing monster truck Blaze and his eight-year-old driver AJ. It’s the first preschool show on TV to comprehensively cover all areas of STEM (Science, Technology, Engineering, Math) in every episode. Blaze and the Monster Machines currently ranks as the number-one preschool show in its time period on all TV, and airs regularly weekdays at 8:30 a.m. and 1:30 p.m. (ET/PT) on Nickelodeon.

In “Fired Up!” Blaze smells smoke at Axle City’s garage, so he calmly and courageously leads his friends outside to safety. The Fire Chief is impressed with Blaze and encourages him to work hard to earn his firefighter badge and join his team. Blaze and AJ set out on a series of thrilling adventures to avert disaster in Axle City.

NickJr.com and the Nick Jr. App will include exclusive content including a first-look at “Fired Up!” beginning Friday, Sept. 18.  A special video will be featured that highlights fire trucks and firefighters across Nick Jr.’s hit series beginning Monday, Sept. 21. NickJr.com will also debut a brand-new Firefighters game which partners Blaze with other popular Nick preschool characters as they team up to help fight fires and save the neighborhood/

Additional upcoming celebrity guest stars in Blaze and the Monster Machines include Mayim Bialik (The Big Bang Theory) as the Sphinx and Anthony Anderson (Black-ish) as Pegwheel the Pirate. In the episodes premiering this fall, Blaze cranks up the power on his monster machine transformations by turning himself into a rocket, fire engine, catapult, cannon and more.

The first mobile app based on the series, Blaze and the Monster Machines, recently launched a Dragon Island update that propelled the app to number one on the Kids and Education chart and the Top 10 overall with iPad Paid Apps. The Blaze and the Monster Machines app introduces preschoolers to STEM concepts as they race along preset courses or build their own tracks, encouraging children to apply critical thinking skills and explore scientific principles including acceleration, adhesion, force, friction and more.

In the toy aisle, Nickelodeon and Fisher-Price, a subsidiary of Mattel Inc., recently launched an all-new toy line based on Blaze and the Monster Machines. With strong online pre-sales leading the way, the line debuted in May exclusive to Toys’R’Us and is now available at all major retailers. The complete introductory line includes diecast vehicles, talking vehicles, Slam & Go, playsets and more that bring the fun and dynamic characters featured in the series to life. Nickelodeon will expand the Blaze license into new categories this fall to include games and puzzles, consumer electronics, outdoor sports and inflatable play structures.

In Blaze and the Monster Machines, the amazing monster truck Blaze and his eight-year-old driver AJ have adventures that explore the physics of how things move; tackle problems through scientific inquiry and mathematics; and discover the parts needed to make everyday technologies work. Each action-packed episode is filled with monster trucks, physical humor and upbeat original songs with lyrics that highlight a STEM concept such as adhesion, friction, force, trajectory and magnetism. Blaze and the Monster Machines is created by Jeff Borkin (Team Umizoomi head writer) and Ellen Martin (Bubble Guppies supervising producer).