Joanna Page is set to return to screens as the voice of ‘Poppy Cat’ in the brand new second series of the colorful and adventure-filled children’s animation. 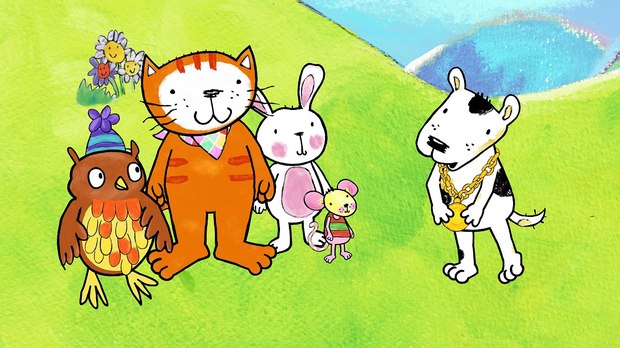 Joanna Page is set to make a welcome return to screens as the voice of Poppy Cat in the brand new second series of the colorful and adventure-filled children’s animation, which launches on Nick Jr. at 9am every weekday starting September 8th.

Poppy Cat is co-produced by Coolabi's television production arm, Coolabi Productions and award-winning King Rollo Films, and was commissioned by Nick Jr. in the U.K. Series one airs in more than 140 territories worldwide and is a top-rated show on Nick Jr. U.K., on Sprout in the U.S., in France on France5 and in Spain on TVE.

This season will see all of the favorites back again such as Zuzu the dog, Mo the Mouse, Alma the rabbit, Egbert the badger (and master of disguises), and Owl.

“It is exciting that Poppy Cat has been commissioned for a second season,” Joanna Page comments. “All of our hard work and enthusiasm from the first series has paid off. I got involved with the show because the stories are so sweet, and it is just so great for children -- all of the magical adventures which encourage them to use their imagination, and going off to different worlds, is just so wonderful. “My daughter Eva loves watching Poppy Cat. She is fascinated with the bright colors and all of the different characters and their voices. I think subconsciously she feels a connection with the orange cat, Poppy Cat. I love voicing the character, particularly since becoming a mum -- and as it is already established as a popular pre-school show, it gives me a lot of kudos with my mummy friends! Seriously though, I think it’s great when kids can relate to a character, and for a show to bring to life their potential for imaginative play and creativity. As this series is jam-packed with fun adventures and even more colorful characters, I think the fan base will only continue to grow!”

Based on the international award-winning books written by British author, Lara Jones, Poppy Cat encourages preschoolers to use their imagination to solve problems and discover the world around them. Each episode is seen through the eyes of Poppy Cat’s young owner, a little girl called Lara (based on Lara Jones). It is a celebration of adventure as Poppy Cat and her friends embark on exciting journeys through fantastical lands in aeroplanes, pirate ships, hot air balloons and rockets.

There are currently 17 U.K. licensing partners for Poppy Cat. Coolabi has recently appointed two new licensing agents, Firefly Brand Management in the US and El Ocho in Spain. StoryToys has launched a new gaming and story app, which is available on iOS and android.

The Poppy Cat brand has been associated with well-known and respected organizations with the central aim of making everyday activities into extraordinary adventures for mums and their little ones. These partnerships include the Woodland Trust, Nickelodeon Land, Sea Life Centre, Picture House Cinema and many more.