‘Snooze You Lose’ episode premiering March 4 to be followed by a special crossover episode of Butch Hartman’s ‘Bunsen is a Beast’ with ‘The Fairly OddParents.’ 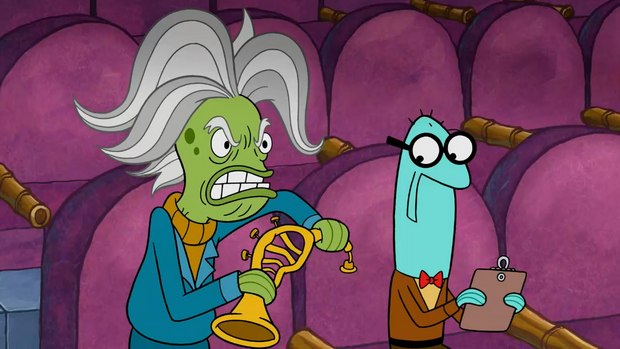 Simmons voices Maestro Mackerel, the middle-aged and impatient conductor of the Bikini Bottom Philharmonic. Beautiful music sends him into ecstasy, but bad playing is physically painful to him and he shows his displeasure by tying instruments into knots (usually around the unfortunate musician’s head).

In the episode, “Snooze You Lose,” Squidward is so tired that SpongeBob and Patrick can’t wake him up, but they won’t let him miss his big audition!

Immediately following is a special half-hour episode of Bunsen is a Beast at 10:30 a.m. (ET/PT), featuring a crossover with longstanding series The Fairly OddParents. Both shows are created and executive produced by Butch Hartman and in “Beast of Friends,” it’s Bunsen and Cosmo’s Friend-iversary, so Bunsen excitedly takes Mikey to meet him in Dimmsdale, while Amanda secretly follows. The group has a great time, until Mr. Crocker and Amanda team up and decide to take them down!