Brand-new animated shortform sitcom featuring the stars of the world’s longest running comic ‘The Beano’ from Beano Studios is being produced in the U.K. at Jellyfish Pictures. 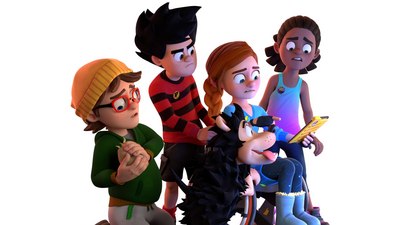 Global kids content distributor Jetpack Distribution has acquired international rights to the first series of the brand-new sitcom featuring the stars of the world’s longest running comic The Beano from Beano Studios.

Series one of Dennis & Gnasher Unleashed comprises 52 x 11-minute episodes and centers on Dennis, who nothing or no-one can contain. The more extreme the adventure, the louder the rock track, the more epic the skateboard trick, the more Dennis wants to take the lead. Dennis is inseparable from Gnasher, a stray dog he adopted and now his faithful sidekick. Gnasher is an extremely rare Abyssinian wire-haired tripe-hound with the strongest jaws and a razor-sharp wit to match.

In their latest TV adventures, they are joined by their irrepressible, adventurous friends Rubi, JJ, Pieface and his pet potato Paul. Together they ramp up the energy, cook up crazy plans, get in all sorts of scrapes and take on every challenge, no matter how big. Dennis and Gnasher Unleashed invites audiences to experience and explore the world through the exciting adventures of Dennis and his pals. In this world kids are empowered and fight for their unique kid-centered world view. They are independent, in control and free. They stick up for each other through thick and thin.

“We are thrilled to be showcasing a new CGI look and feel of this loveable and infamous mischief maker at MIP,” said Jetpack Distribution CEO Dominic Gardiner. “Dennis & Gnasher Unleashed promises to be a real hit and contains so many elements that kids love – fun, humor, excitement and friendship. We are really looking forward to presenting the show to global buyers.”

The show is voiced by an all-star cast including: silver screen actor Freddie Fox as Dennis (King Arthur: Legend of the Sword, Pride); Ryan Sampson as Pieface (Plebs, After You’ve Gone); Rasmus Hardiker as Walter (Your Highness, Thunderbirds Are Go); Kathryn Drysdale as JJ (St. Trinians, Two Pints of Lager and a Packet of Crisps) and Kelly Marie Stewart as Rubi (Hollyoaks).

Dennis & Gnasher Unleashed is being produced in the U.K. at Jellyfish Pictures.

“We are bringing a truly filmic feel to Dennis and Gnasher Unleashed,” added Allison Watkins, EVP consumer products and TV distribution, Beano Studios. “It is a high-quality CGI series rooted in real world film techniques. Using sophisticated directional lighting and real-world cameras and lenses we have created a rich and atmospheric world.”