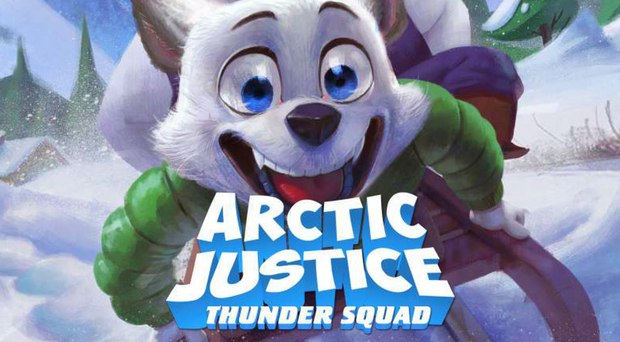 When the sinister Doc Walrus (voiced by John Cleese) hatches a secret plot to accelerate global warming and melt the arctic circle, a rag-tag group of inexperienced heroes (voiced by Renner, Franco, Baldwin, Huston, Klum and Sy) must come together to foil his evil plans and save the arctic.

Swifty (Jeremy Renner), an arctic fox, dreams of becoming one the famous Top Dogs, a team of huskies that deliver packages for the Arctic Blast Delivery Service. In the Arctic, every day trips can quickly turn into epic journeys, which make the Top Dogs the Arctic’s every day heroes.

In an effort to prove himself, Swifty secretly commandeers a delivery sled to takes a mysterious package to a secret, icy, fortress where he comes face to face with Doc Walrus (John Cleese), a blubbery evil genius who walks around on robotic legs, and commands a loyal army of oddly polite puffins. Swifty stumbles upon Doc Walrus’ evil plan to drill to the center of the Earth to unleash enough lava to melt the polar ice caps in order to flood the planet and become be king of the world. Now, Swifty has to enlist the help of his friends: PB (Alec Baldwin), an introverted polar bear, Lemmy (James Franco), a scatter-brained rock and roll albatross, Sal (Omar Sy) and Weez (Heidi Klum), two conspiracy theorist otters, and Jade, a red fox, who’s a tough as nails mechanic that Swifty has a secret crush on. This ragtag team has to band together and overcome their differences if they’re going to stop Doc Walrus and his army of Puffins from destroying the world.

The movie is fully financed and being produced by AMBI and its principals, and animation work for the film is being done out of AMBI’s Toronto based studio, AIC Studios. AMBI Distribution, the worldwide sales arm of the AMBI Group, is overseeing worldwide distribution for Arctic Justice: Thunder Squad and has already closed a deal with The Walt Disney Company for German Speaking Europe.

“Jeremy is as talented a performer as you’ll find anywhere in the world and we’re very happy he’s bringing his talents to the Arctic for this fun, big screen adventure for the whole family,” said Iervolino.

“Jeremy’s voice, energy and charisma will be the center of this heartwarming, family-friendly comedy,” Bacardi added. “His animated nature lends itself perfectly to Swifty’s character. We believe that this contemporary voice cast will resonate with audiences. The real life takeaway from this animation is entertaining and thought provoking all at the same time.”

Over the course of more than 20 years, Oscar-nominated Renner has established himself as one of Hollywood’s most versatile and accomplished actors. Among the hit films he’s starred in include The Avengers, The Bourne Legacy, The Hurt Locker, The Town, American Hustle, and Kill the Messenger, among many others. In 2011, Renner and his producing partner Don Handfield formed their own production company, The Combine. Their next film is The Founder, an upcoming biopic of McDonald’s founder Ray Kroc, starring Michael Keaton. In addition to acting and producing, Renner is also a singer, songwriter, guitarist, keyboardist, and drummer. He has performed in several of his films including The Assassination of Jesse James by the Coward Robert Ford, North Country and Love Comes to the Executioner.