Veteran Adult Swim creative executive named SVP Anime and Action Series/Longform, will lead studios’ expansion into anime development, production, and programming; tenure begins with ‘The Lord of the Rings: The War of Rohirrim.’ 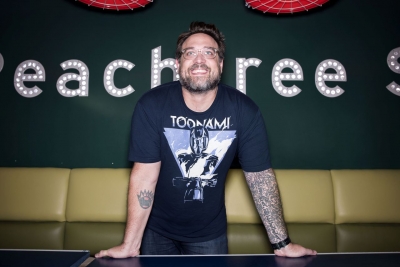 In his newly formed dual role, DeMarco will spearhead WBA and CNS’ expansion into producing anime content, drawing upon his extensive experience and relationships with some of Japan’s most prolific anime studios, artists, and creators. He will also be responsible for identifying and developing projects in the animated action genre. In both cases he will pursue properties – original, library and third-party – to develop and produce series and longform programming for all audiences. Among his first projects, DeMarco will serve as the lead creative executive on The Lord of the Rings: The War of the Rohirrim, the upcoming original anime feature film directed by acclaimed filmmaker Kenji Kamiyama and produced by New Line Cinema and WBA.

According to DeMarco, “I got into this business because I love action cartoons and storytelling. Being able to work in anime and action development, two areas of animation I care about deeply, is a dream come true. I can’t wait to bring everything I’ve learned from Toonami and Adult Swim to our animation studios.”

“Jason is an outstanding executive with a proven track record of successfully partnering with the best anime storytellers and creators and doing so with an unmatched level of enthusiasm,” Register said. “His wealth of knowledge and passion will bring Warner Bros. Animation and Cartoon Network Studios sought after opportunities in the anime and action space.”

Ouweleen added, “Jason has been a key creative voice at Adult Swim since before it started.  We are delighted that he will still be working with us on everything Toonami, and beyond thrilled to share his incredible dedication and expertise with our animation studios.”

DeMarco has been with Adult Swim and Cartoon Network for more than 20 years, beginning as a senior writer/producer and rising through the ranks of the on-air, marketing and promotions teams. Among his many accomplishments, DeMarco co-created the Toonami programming block and has managed the brand throughout its nearly 25-year history. He also founded Adult Swim’s Williams Street Records, creating original music albums which then inspired the launch of the popular Adult Swim Singles Program. The annual program provides free streaming music to fans by new and emerging artists, as well as top acts such as Run The Jewels. His passion for music and extensive relationships with industry artists led to the debut of the first ever Adult Swim Festival, which was held in Los Angeles in 2018 and continues today.