Japan in the Spotlight at Second Annual ANIMATION IS FILM Festival 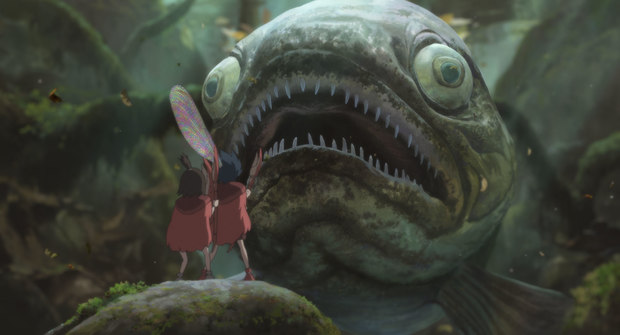 LOS ANGELES -- ANIMATION IS FILM has announced a terrific lineup of Japanese animated features and short films set for the second annual edition of the Festival, which takes place October 19-21 at the TCL Chinese Theatre in Hollywood. Tickets are available for purchase now at animationisfilm.com -- use the code “AWN” at checkout to receive a 40% discount on passes and tickets!

This year’s program includes the World premiere of a new compilation of short films, Modest Heroes: Studio Ponoc Short Theatre, Vol. 1, which screens on Saturday, October 20. Studio Ponoc, the new animation studio founded by two-time Academy Award nominee Yoshiaki Nishimura (The Tale of The Princess Kaguya, When Marnie Was There) and featuring many artists from the venerable Studio Ghibli, made an immediate splash with their acclaimed debut film Mary and The Witch’s Flower, a 2017 ANIMATION IS FILM selection. Studio Ponoc returns to the festival this year with Modest Heroes, an ambitious collection of three thrilling tales directed by Yoshiyuki Momose, Akihiko Yamashita and Hiromasa Yonebayashi, some of the greatest talents working in Japanese animation today.

Making its North American premiere on Sunday, October 21, I Want To Eat Your Pancreas, directed by Shin’ichiro Ushijima, follows an unnamed protagonist who happens to find a diary in a hospital one day. The diary belongs to his classmate, a girl named Sakura Yamauchi, who is revealed to be suffering from a terminal illness in her pancreas, and who only has a few months left to live. Sakura explains that the protagonist is the only person apart from her family that knows about her condition. The protagonist promises to keep Sakura’s secret. Okko’s Inn, directed by Kitaro Kosaka, also makes its North American debut on Saturday, October 20. The story takes audiences into the daily life of Seki Oriko, a primary school pupil who, following the death of her parents, moves to live with her grandmother, the owner of a traditional inn. When not in class, the young girl works in the establishment and grows up little by little with the help of the ghost Uri-Bo and other mysterious friends.

Sunday, October 21, marks the Los Angeles premiere of director Hiroyasu Ishida’s Penguin Highway. Aoyama-kun knows there are mysterious things happening around him, for one thing he’s seen a soda can turn into a penguin, but that’s not the end of it and he’s determined to get to the bottom of things. Despite being wildly intelligent and fiercely determined, Aoyama-kun is only in fourth grade, so he knows he may need some help in his ambitious research. He employs a select few trustworthy classmates including his loyal, if a little timid, best friend and a studious and wise girl. But his greatest ally and perhaps the key to the whole mystery is the strange young woman who works in a dental clinic.

ANIMATION IS FILM will also include a four-film special retrospective of acclaimed Japanese director Mamoru Hosoda, whose animated feature Mirai opens the Festival on Friday, October 19. As previously announced, Hosoda will attend all festival screenings of his work in person.

An official selection at Cannes Directors’ Fortnight, and the epic capstone of director Mamoru Hosoda’s career, Mirai is a sumptuous, magical, and emotionally soaring adventure about the ties that bring families together and make us who we are. Retrospective screenings include The Girl Who Leapt Through Time, Summer Wars, Wolf Children and The Boy and The Beast. ‘The Girl Who Leapt Through Time’ directed by Mamoru Hosoda. ‘The Boy and The Beast’ directed by Mamoru Hosoda. ‘I Want To Eat Your Pancreas’ directed by Shin’ichiro Ushijima.