The deadline for submissions to the 19th Japan Media Arts Festival is Wednesday, September 9, 2015. 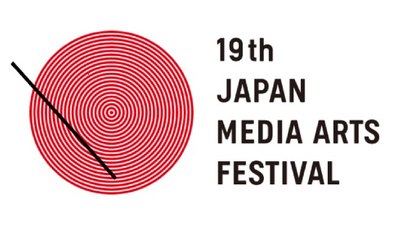 The 19th Japan Media Arts Festival has opened its 2015 Call for Entries.

The Japan Media Arts Festival is a comprehensive festival of Media Arts (Media Geijutsu) that honors outstanding works from a diverse range of media -- from animation and comics to media art and games. The festival gives awards in each of its four divisions: Art, Entertainment, Animation, and Manga. It also provides a platform for appreciation of the award-winning and other notable works.

Since its inception in 1997, the festival has recognized significant works of high artistry and creativity, and in addition to a yearly Exhibition of Award-winning Works has held other events, such as symposiums, screenings, and showcases. Last year, the 18th Festival received of 3,853 works from 71 countries and regions around the world, demonstrating its continuing evolution as an established annual international festival. Award-winning works are exhibited both within Japan and abroad through various projects and events organized by The Agency of Cultural Affairs which aims to develop and promote the creation of Media Arts by focusing primarily on the new generation of artists and their understanding, awareness and appreciation of Media Arts.

Entries are sought from professional, amateur, independent and commercial creators across the globe. Works completed or released between Wednesday, September 3, 2014 and Wednesday, September 9, 2015 are eligible for entry in the four divisions -- Art, Entertainment, Animation and Manga. Through a rigorous judging process for each division, Award-winning Works will then be selected based on their artistic quality and creativity. In late November, festival organizers will announce the winners of the Grand Prizes, Excellence Awards, New Face Awards and Special Achievement Awards, as well as other Jury Selections.

Entries are accepted in a wide range of categories in the field of Media Arts including: interactive art, video works, games, web-based works, animations and manga.

Entries can be submitted by uploading data online or by post.

The Call for Entries

The entrant must hold the copyright of the submitted work. If the work is submitted by a representative, permission from the copyright holder must be obtained. (Each entrant must read, understand and accept the Rules and Regulations before submission; by submitting their work, the entrant is deemed to have accepted all Entry Rules and Regulations as stated.)

The Awards (Winners to be announced in late November)

Through the JMAF official website, we welcome recommendations from members of the public of any exceptional works in Media Arts. Based on these recommendations, the Japan Media Arts Festival Secretariat will investigate the works and consider their possible entry.