The Academy Award winning actor will voice ‘The Dragon’ in Peggy Holmes’ tale of the unluckiest girl in the world, the first project under the animation studio's new multi-year deal to produce films and TV shows for Apple TV+. 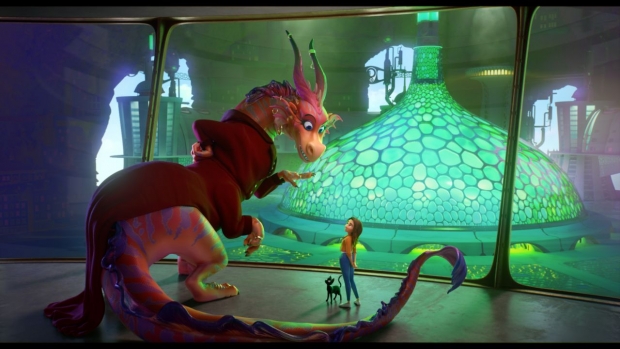 On the heels of yesterday’s Apple announcement of a multi-year deal with Skydance Animation to deliver animated films and TV shows for Apple TV+, Academy Award-winner Jane Fonda has signed on to voice a lead role in the animation studio’s upcoming feature, Luck.

Fonda will provide the voice for “The Dragon,” the exuberant CEO of Good Luck and undisputed luckiest ancient being in all the land. The Dragon is elegant, stylish, and as persuasive as she is powerful. The only thing better than good luck is more good luck, so when bad luck starts to spin out of control, she must face her fears or risk losing good luck forever.

Directed by Peggy Holmes (Secret of the Wings, The Pirate Fairy, The Little Mermaid: Ariel’s Beginning) and written by Kiel Murray (Cars, Cars 3), Luck centers around the unluckiest girl in the world, who after stumbling upon the never-before-seen world of good and bad luck, must join together with magical creatures to uncover a force more powerful than even luck itself. John Lasseter, David Ellison, Dana Goldberg, and David Eisenmann are producing for Skydance Animation.

The Apple / Skydance Animation partnership will kick-off with both Luck and a second animated feature, Spellbound, as well a two-season order for the new series, The Search for WondLa, that will mark Skydance Animation’s TV debut.

Fonda has had an illustrious and varied career, with numerous awards recognitions including: two Academy Awards, seven Golden Globe Awards, two BAFTA Awards, an Emmy Award and two Tony Award nominations. She will be honored later this month with 2021 Cecil B. DeMille Award at this year’s Golden Globes and was the 2014 recipient of the AFI Life Achievement Award.

Along with starring roles in dozens of highly acclaimed productions, Fonda has also produced numerous film and TV projects including Klute, Coming Home, The China Syndrome, Nine to Five, and On Golden Pond. Fonda currently stars in hit comedy series, Grace and Frankie, produced by Skydance Television, which is set to become the streamers longest running series with the premiere of the show’s seventh season. Fonda is represented by CAA and Untitled.