Martin Hobbs steps down after 5 years at the helm to pursue an outside position; company’s former studio director takes over the MD role. 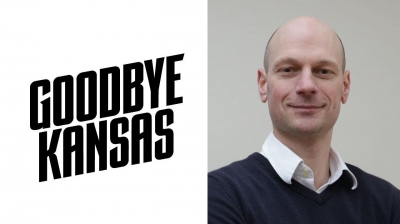 After a five-year tenure, Martin Hobbs is stepping down as managing director at Goodbye Kansas Studios in London, leaving the company to pursue an outside position. Stepping into the role is James Prosser, who has served both as studio director and executive producer since joining the U.K. studio at its 2016 inception.

Prior to joining the company, Prosser was VFX executive producer/supervisor at ZOO. While there he worked on the BAFTA winning Natural History Museum Alive and Flying Monsters 3D; he won an Emmy for his work on First Life with David Attenborough. He began his career at MPC, where his credits included The Chronicles of Narnia: Prince Caspian, Harry Potter and the Prisoner of Azkaban, 10,000 BC, and Corpse Bride.

“I am very pleased that James Prosser takes the role as MD,” noted Goodbye Group CEO and managing director, Peter Levin. “He has been a key force in the decision to start up our UK operations and is a highly respected manager and a genuine team player. We are excited about our offering and plans for growth in London over the coming years.”

“I’m so proud of what the team has built and achieved together over the last few years and especially how everyone has faced the many recent challenges,” commented Prosser. “I’m extremely excited to be working with the team as we start what feels like a new chapter as we emerge from the pandemic and define our new normal. We have a special family and ethos that extends across our locations, and we will continue to push our collective capabilities whilst taking great care of the work, our clients and each other as we grow over the years ahead.”

Goodbye Kansas has seen an increase in their sales pipeline as COVID-19 restrictions are relaxing and the U.K. opens. The studio has expressed optimism with respect to business for the second half of the year.  The studio’s recent credits include The 355, The Irregulars, Behind her Eyes, and Birds of Paradise. They are currently in production on Outlander, Alex Rider, Locke and Key, and The Emigrants.