'Jake and the Neverland Pirates' Sail into Season 3 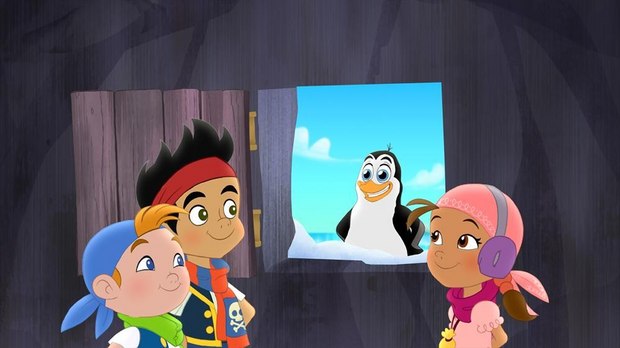 Season three of Disney Junior's Emmy-nominated animated series Jake and the Never Land Pirates will premiere Friday, January 3 on Disney Channel (8:30 a.m. ET/PT) and Disney Junior (7:50 p.m. ET/PT). The new season introduces rival characters including pirate ghosts, mummies and robots, and incorporates special super powers and spectacular gadgets for Jake and his crew, including Jake’s Mega-Mecha Sword, a robot suit and an invisibility ring that will help the gang outwit their new adversaries.  The season will also include action-packed extended length episodes and a revamped rock and roll-style theme song performed by Sharky and Bones of The Never Land Pirate Band.

New episodes of Jake and the Never Land Pirates will air every Friday throughout January and February, culminating with the premiere of a special extended episode on Friday, February 28, featuring three 11-minute stories that pit Jake against Hook in an ultimate showdown. All featured episodes will be simulcast for verified users on WATCH Disney Junior in conjunction with the television premieres and will become available the following day on WATCH Disney Junior, Disney Junior on Demand, iTunes, Xbox and Amazon.

Beginning Friday, January 31, DisneyJunior.com/Jake will debut the new game, Jake and the Never Land Pirates: The Super Pirate, where players can take on the role of Jake as he attempts to retrieve the Mega-Mecha Sword that Captain Hook has stolen.  Each Friday, through February 28, kids are invited to unlock a new game level.

The strong connection kids 2-7 and their parents have with the characters and stories of Jake and the Never Land Pirates has led to brand extensions across other Disney businesses.  The series is prominently featured in Feld Entertainment's 90-city nationwide tour, "Disney Junior Live On Tour! Pirate and Princess Adventure," and Jake and his crew are an integral part of the popular "Disney Junior Live on Stage!" attraction at Disney California Adventure park at the Disneyland Resort and Disney's Hollywood Studios at the Walt Disney World Resort in Florida where the Jake character also meets with fans daily. Disney Consumer Products has licensed LEGO DUPLO sets, action figures and playsets, board games, bikes, apparel and bedding, available at major retailers nationwide.