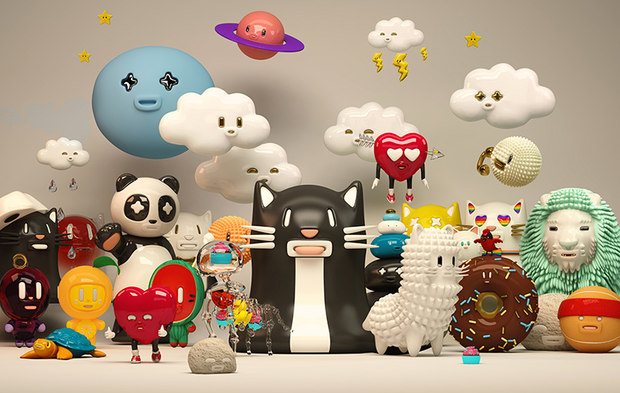 Álvarez Sobreviela’s star has risen rapidly in recent years, seeing him create characters, both inside and outside the Mr Kat family, for brands like Apple, Movistar+ and Vodafone, as well as boutique fashion and luxury brands.

Besides commercial work, Álvarez Sobreviela has turned his hand to more mature creations, such as the series “Ancestral,” a fusion of pre-Columbian art and contemporary character design, exploring ancestral cultures represented in a kawaii style. Many of the pieces in “Ancestral” appeared as physical sculptures hand-crafted out of resin or wood by local Peruvian artisans.

All of Álvarez Sobreviela’s creations are characterized by tenderness, playfulness and happiness. “Kawaii designs have a great power of communication,” says the artist. “They are universal expressions combined with extreme tenderness that transport kids as much as adults. My designs are especially sensorial, with characters that seem to express the feeling that the viewer wants according to their emotional state.”

Final Frontier executive producer Gustavo Karam says, “We’re delighted to bring Jaime in to the Final Frontier family. Besides being an outrageously talented artist, with his cute, playful, yet classy and sophisticated aesthetic, we couldn’t think of a creator more perfectly suited for this part of the world.”

Final Frontier has already begun talks with licensing partners to bring the Mr Kat IP to China for location based entertainment, toys and merchandise, and will present the concept at the China Licensing Expo in Shanghai from October 16-18.