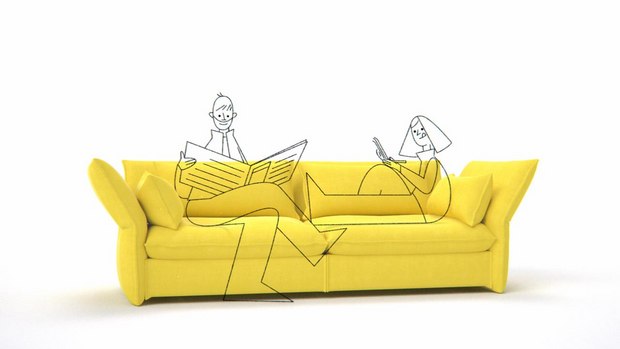 The animation opens with the Mariposa sofa center stage, created using photoreal CGI, with the arms and back animated in a stop motion aesthetic. The CGI background is a subtle grey scale, giving focus to the sofa as a contrasting beacon of colour. As we begin our sofa’s journey we are introduced to our family -- beautifully hand rendered and animated line drawings layered over the photo-real Mariposa.

The animation illustrates home-life unfolding around the sofa; from Friday night movie marathons and Saturday morning play sessions, to rainy Sunday reading. The camera moves 360 degrees around the sofa and we watch its role change with each family member’s interaction, using the flexibility of the arms and back to suit their needs.

“I leapt at the opportunity to work with Edward and Jay and try out this exciting new approach to animation,” says Nexus director Jack Cunningham. “It was a great excuse for me to explore merging a photoreal CGI aesthetic with lo-fi, playful hand drawn animation.”

Vitra is a Swiss company dedicated to improving the quality of homes, offices and public spaces through the power of design. The Mariposa collection is available to purchase online and in-store from September 2015.