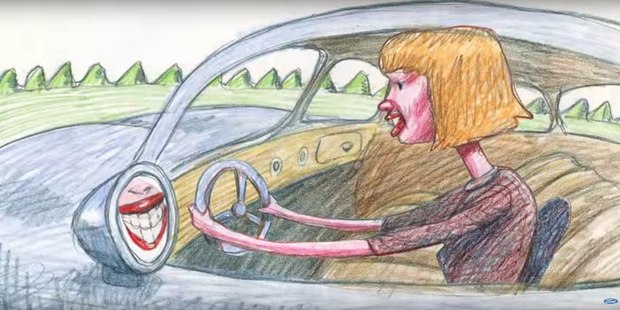 Though they’ve been friends for over 30 years, this was the duo’s first collaboration. GTB approached Sedelmaier to act as an art director, producer and animation director of the campaign. Sedelmaier drew from his long roster of talented colleagues to “cast” the campaign, and jumped at the chance to finally work with Plympton (others included Al Jaffee of Mad Magazine fame and MK Brown from National Lampoon).

One of the three spots, which was produced with Plympton,”The Importance of Paying Attention: Teeth,” has been nominated for the prestigious “Best Animated Television/Broadcast Commercial” of the 2016 44th annual Annie Awards.

Sedelmaier is known for fostering unique animation -- aimed at capturing the spirit and humor of a brand message with 2D animation. “I trust Bill explicitly. I knew he’d do a fabulous job and stamp it with his distinctive style/technique,” Sedelmaier says.

At the onset of the project, Plympton pitched several ideas to him. “We discussed his ideas and chose three to send to the agency. Everyone immediately gravitated towards the ‘Teeth’ idea. My job on this particular spot was to be the producer and let Bill do his thing, while keeping the lines of communication flowing with the agency and client.”

Both Sedelmaier and Plympton acknowledge that they appreciated the freedom given to them by GTB. “Kudos to the agency for being nothing but supportive throughout the process!”

The film features a woman driving, but noticing in the mirror that she has food stuck in her teeth. She puts both feet on the steering wheel to retain as much control as possible(?!), reaches into the glove compartment, pulls out a dental drill, and starts going at the spec of food. The car hits a pot-hole and we see several of her bloodied teeth fly into the hole. We hear an incredulous “Oh, heck.”

The spot currently has more than 1.8 million views on YouTube.

While the nomination category is filled with campaigns of a sophisticated production level, both CG and 2D, this film stands alone in its colored pencil and hand-drawn trademarked “Plymptoons” style. Both Plympton and Sedelmaier have been nominated and won Annies in the past, but this particular nomination is a great achievement, reminding the animation community that a simple idea with quality content and humor go a long way -- even without the trappings of modern design/production techniques.