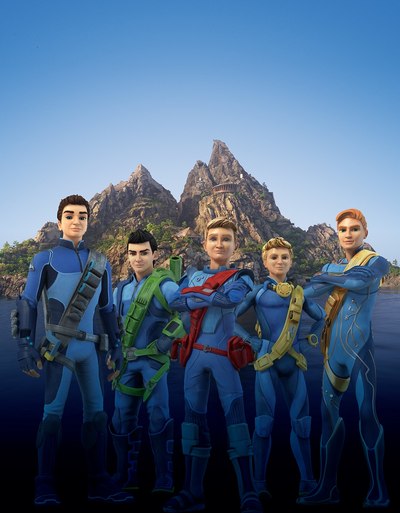 Produced by ITV Studios and Pukeko Pictures in association with Weta Workshop, Thunderbirds Are Go is produced using a unique mixture of CGI animation and live-action miniatures and aims to bring the Thunderbirds brand to a new global audience of children aged 5-11 years.

Steve Green, EVP Kids for ITV Studios Global Entertainment comments, “We’re delighted to have Tohokushinsha Film Corporation on board as our broadcast and licensing partner for Japan.  Tohokushinsha has been a fantastic ambassador for the Thunderbirds brand since 1966 when it introduced the original Thunderbirds series to the Japanese market.  Almost five decades on, we’re delighted to be extending our relationship with Tohokushinsha to bring this groundbreaking series to the legions of loyal Japanese Thunderbirds fans and new entrants who I’m sure will love the show as much as previous generations have before.”

Since its UK broadcast debut in April, Thunderbirds Are Go has achieved outstanding ratings. The first two episodes aired back to back on ITV and attracted a consolidated audience of 2.9 million viewers. Following the premiere, the series has continued to draw in strong ratings as it simultaneously airs on children’s channel CITV in addition to ITV. The show regularly reaches the top of its time slot on ITV among kids and outperforms the channel average across all key demographics, while on CITV, the show exceeds the slot average and performs exceptionally well among boys aged 6-11. The new series has also achieved strong ratings in Australia since its debut on Nine Network’s GO! channel in April. The premiere episode had 205k viewers and was the No.1 show both for its slot and for that day across all multi-channels.