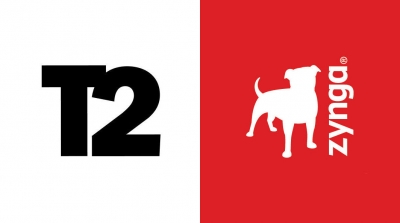 Leading game company Take-Two Interactive has just announced a deal to acquire mobile gaming giant Zynga. The cash and stock deal, representing a 64% premium over Zynga’s January 7 closing share price, values the combined enterprise at approximately $12.7 billion, and will establish Take-Two as one of the largest and most diversified mobile game publishers in the industry.

“We are thrilled to announce our transformative transaction with Zynga, which significantly diversifies our business and establishes our leadership position in mobile, the fastest growing segment of the interactive entertainment industry,” commented Take-Two chairman and CEO Strauss Zelnick. “This strategic combination brings together our best-in-class console and PC franchises, with a market-leading, diversified mobile publishing platform that has a rich history of innovation and creativity. Zynga also has a highly talented and deeply experienced team, and we look forward to welcoming them into the Take-Two family in the coming months. “

Zelnick went on to share the belief that the deal “will deliver significant value to both sets of stockholders,” noting further that it will result in “at least $500 million of annual Net Bookings opportunities over time.”

“Combining Zynga’s expertise in mobile and next-generation platforms with Take-Two’s best-in-class capabilities and intellectual property will enable us to further advance our mission to connect the world through games while achieving significant growth and synergies together,” added Zynga CEO Frank Gibeau. “With this transformative transaction, we begin a new journey which will allow us to create even better games, reach larger audiences and achieve significant growth as a leader in the next era of gaming.”

Zelnick will continue to serve as chairman and CEO, with the management team of Take-Two leading the combined company. Zynga's management team of Gibeau and president of publishing, Bernard Kim, will oversee the integration, and day-to-day operations of the mobile games business, which will operate under the Zynga brand as its own label within the Company. Take-Two will expand its board of directors to 10 members upon the closing of the transaction to add two members from Zynga’s Board of Directors.

The company announcement stated a number of key strategic points as to the deal’s rationale and value creation for stockholders:

With Zynga’s stockholders receiving approximately 64.5% 1 of the transaction consideration in Take-Two stock, both groups of stockholders will benefit from the combined company’s greater scale, enhanced financial profile, and the synergies created through the transaction.

Take-Two has also identified over $500 million of incremental annual Net Bookings opportunities to unlock over time, driven by:

Take-Two expects approximately $100 million of annual cost synergies within the first two years after closing, primarily driven by the reduction of duplicate overhead including corporate general and administrative expenses and public company costs, as well as the benefit of scale efficiencies across the enterprise.

The transaction, which is expected to be completed during the first quarter of Take-Two’s Fiscal Year 2023, ending June 30, 2022, is subject to the approval of both Take-Two and Zynga stockholders and the satisfaction of customary closing conditions, including applicable regulatory approvals.