The streamer’s inaugural virtual fan event, coming September 25, will host 145 of its biggest stars and creators, with first looks and exclusives from over 70 series, films, and specials; check out the hour-by-hour breakdown so you don’t miss a beat. 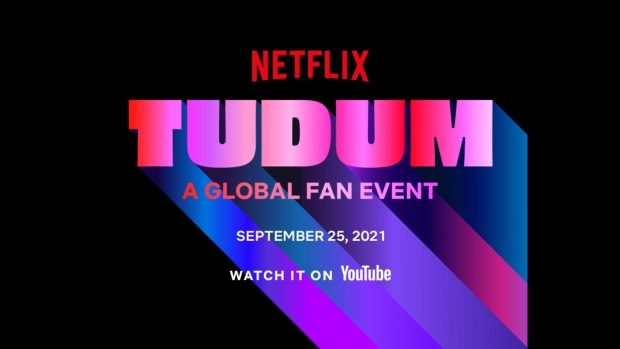 It’s around the corner – “TUDUM: A Netflix Global Fan Event” an inaugural virtual event devoted entirely to fans across the globe who will be the first to see exclusive trailers, clips, and announcements from over 100 series, films, and specials, announced by over 145 of their favorite stars. The event takes place September 25 beginning at 9am PST / 12pm EST and will be broadcast across Netflix’s YouTube channels worldwide, in addition to Twitter, Twitch and Facebook.

Inspired by the first beat you hear when you watch a show or movie on Netflix, TUDUM is the streamer’s first-ever global fan event with one simple purpose - to entertain and honor Netflix fans from around the world. The hour-by-hour breakdown is as follows: Comedian Lilly Singh will host the first hour, which includes:

Bridgerton’s Nicola Coughlan will serve as master of ceremonies for the third and final hour:

The virtual livestream event begins at 9am PST / 12pm EST / 4pm GMT / 1am JST and KST. The event will be broadcast across Netflix’s YouTube channels worldwide, in addition to Twitter, Twitch and Facebook.

There will be special pre-shows spotlighting Korean and Indian series and films along with exciting anime content that will kick-off at 5am PST / 8am EST / 12pm GMT / 9pm JST and KST on specific channels.