Twenty-second edition of the Stuttgart Festival of Animated Film to present, ‘Music & Animation,’ highlighting the “virtuous interaction between music and animation” presented by five teams of outstanding international artists from the music and visuals scene. 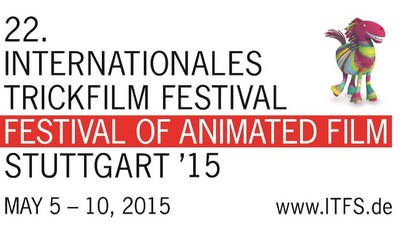 In only a few days Stuttgart again will become the international hotspot for animated film. From May 5-10 2015 the best animated films from all over the world will be shown at the 22nd edition of Stuttgart Festival of Animated Film (ITFS). More than 1,000 films represent the genre’s whole range in over 200 single events.

A new event highlight is “Music & Animation”. The virtuous interaction between music and animation is presented by five teams build of outstanding international and national artists from the music and visuals scene at May 9 at Scala in Ludwigsburg. “We’re very happy”, says Prof. Ulrich Wegenast, ITFS Managing Director Programme, “that we won such renowned  institutions as Scala Ludwigsburg, Ludwigsburger Schlossfestspiele, jazzopen  Stuttgart and the Animation Institute of the Filmakademie Baden-Württemberg for this exclusive event.”

In other areas some promising cooperation has been build, too. For the Tricks for Kids Series Award Reed MIDEM, organizer of the worldwide biggest film- and digital content fair, could be won. “The winner gets a registration for MIPJunior,” explains Dittmar Lumpp, ITFS Managing Director, Organisation and Finances, “and has therefore the best opportunities to gain some success at the worldwide market.”

The awarding takes place under the slogan “Stories and Series in the New Castle” in combination with the awarding of the German  Animation Screenplay Award. Nominees for the prize, sponsored by Telepool, are Mullewapp – Eine schöne Schweinerei by Jesper Møller, Robbi, Tobbi und das Fliewatüüt by Jan Berger as well as Tilda und Münchhausen by Jan Strathman and Katharina Reschke. Famous actress Anna Thalbach hosts the gala, her daughter Nellie Thalbach reads from the nominated screenplays. In cooperation with Staatsoper  Stuttgart (Stuttgart Opera) the film Das fliegende Opernhaus (The flying opera  house) will be premiered in the presence of director Anna Matysik, furthermore the ensemble members of the opera are live on stage with presentations from Mozart’s “Così fan tutte“.

A world premiere is celebrated by Rascal the Little Raven 2 – The Big Race. The feature film competition AniMovie comes up with several German premieres, e.g. the Oscar-nominated film Song of the Sea by Tomm Moore, Mune: Le Gardien de la Lune by Benoît Philippon and Alexandre Heboyan, Pos Eso by SAM and Ku! Kin-dza-dza by Georgy Daneliya, Tatiana Ilyina. As an international premiere Albert by Karsten Kiilerich is shown.

Under the slogan “Animation Comedy” the German  Voice Actor Award  is awarded  at Renitenztheater. Nominees are Elyas M’Barek (Paddington in Paddington), Carolin  Kebekus (porcupine Matilda in Der kleine Drache Kokosnuss) and Ralf Schmitz  (Sunny in Der 7bte Zwerg) – all of them are expected to the show. Comedian Dodokay and Simpsons’ director David Silverman present a Swabian  sync of the yellow cult family. Anna Thalbach will do a live dubbing show and Daniel Nocke (awarded with e.g. Grimme Award, German  Television Award) presents the world  premiere of his film Wer trägt die Kosten?.

At the Animated Com Award prizes are awarded  for outstanding work in the areas of advertising, spatial communication and technology, furthermore the special awards of the Daimler AG and U.I. Lapp GmbH. Since this year the Animated Com Award cooperates with spotlight – Festival für Bewegtbildkommunikation (May 8 & 9, for the first time in Stuttgart). On May 8, 2015  the award  show “Animated Com Award – Gala der Werbetrickfilme im Mercedes-Benz Museum” takes place at Mercedes-

Benz Museum in Stuttgart. Jörn Großhans, VFX Supervisor at Mackevision, is keynote speaker. He recently has been awarded  with an Emmy for the digital effects in “Games of Thrones” and gives some insights in his work.

The successful cooperation with Mercedes-Benz Museum (Animated Com Award, Tricks for Kids with workshops and Best Of-screenings) and U.I. Lapp GmbH (Animated Com Award and the Indian Film Night) will be continued. Additionally in 2015  Hansgrohe, another regional world market leader, is on board. With Antenne 1 one of the biggest private radio stations in South Germany  is a new media partner. Antenne 1 accompanies the festival with a huge campaign and reports live from its glassy studio at Schlossplatz Stuttgart every day.

At Toy Story’s 20th anniversary  (the film will be shown at the open air) Pixar is expected. Jérôme Mouscadet (Studio 100 Animation Paris), director of the series „Heidi“ will be present, furthermore Studio 100 Media München and M.A.R.K 13 with the film "Maya the Bee“. David Sproxton (founder and CEO of Aardman Animation, "Shaun the Sheep“) will talk about crowdfunding. More attendant animation studios and production companies are among  others Vivi Film (producers of the Oscar-nominated films The Triplets of Belleville and The Secret of Kells), Laika (USA, multiple Oscar-nominated, The Boxtrolls), Copenhagen Bombay, SWR with the format workshop “I’m thinking of an animal” or Sacre Bleu (Paris).

“Games for everybody” is this year’s Game Zone slogan. Numerous workshops and presentations of the areas games, transmedia and digital content are going to take place at Württembergischer Kunstverein and Jugendhaus Mitte. Especially the topic edutainment – education and entertainment – will get a bigger platform with lectures and games. Rocket Beans TV from Hamburg – known by MTV GameOne and NBC GIGA GAMES – are doing a Let’s Play Event live at the festival stage on Friday and give a daily report about the festival within their show.

“Animation for everybody” – that’s how you could describe the 22nd Stuttgart Festival of Animated Film. “The programme of this year’s ITFS proves  with its variety, numerous cooperations and facets – Animation is for everybody!”, the Managing Directors Lumpp and Wegenast agree.