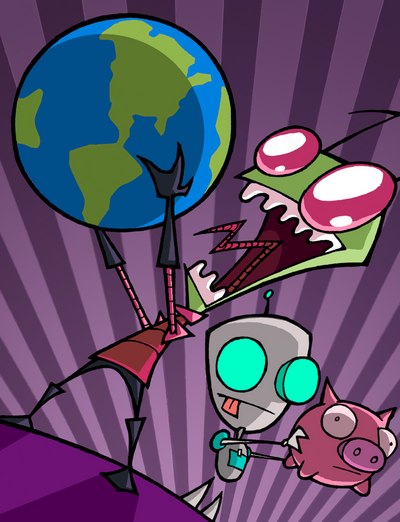 BURBANK, CA -- Nickelodeon has officially greenlit an all-new, 90-minute Invader Zim TV movie from original creator Jhonen Vasquez, marking the network’s third animated property from its rich library of content to be reimagined for today’s audience. The 2D-animated TV movie, produced by Nickelodeon in Burbank, will show the latest and greatest ridiculous attempt at world domination by the universe’s worst alien invader ever. The movie will also feature original voices from the fan-favorite television series.

“As a network that prides itself on a 25-year history of creating groundbreaking, hilarious animation for kids, Invader Zim is one of our great loves. It’s been so exciting to see its popularity grow over the last decade through social media, consumer products and the Zim comic books,” said Chris Viscardi, SVP, Content Development and Production, Animation, Nickelodeon. “What makes this announcement extra thrilling is the adventure that Jhonen has created for Zim, and I can promise you that it is as wonderfully absurd and strangely heartfelt as any fan of the original series could hope for, and kids seeing it for the first time will love it too.”

The Invader Zim TV movie follows the perpetually desperate and delusional Zim as he creates a new and potentially Earth-destroying plan to finally get the attention he deserves from his Irken leaders, the Almighty Tallest.

Invader Zim debuted on Nickelodeon in 2001 and chronicled the efforts of an extraterrestrial named Zim on a mission to conquer Earth and enslave the human race.

Invader Zim joins the previously announced TV movie Hey Arnold!: The Jungle Movie and Rocko’s Modern Life TV special, which are both currently in production. Coming in 2017, Hey Arnold!: The Jungle Movie, will feature a storyline picking up from where the original series ended in 2004, resolving unanswered questions and plotlines, including Arnold finally getting answers about the whereabouts of his missing parents. The Rocko’s Modern Life TV special will bring back all the show’s classic characters and offer some surprising new takes on life in O-Town.