New animated film from Nickelodeon and ‘Invader Zim’ series creator Jhonen Vasquez brings the fan favorite alien from planet Irk back to do battle once more with his human nemesis, Dib. 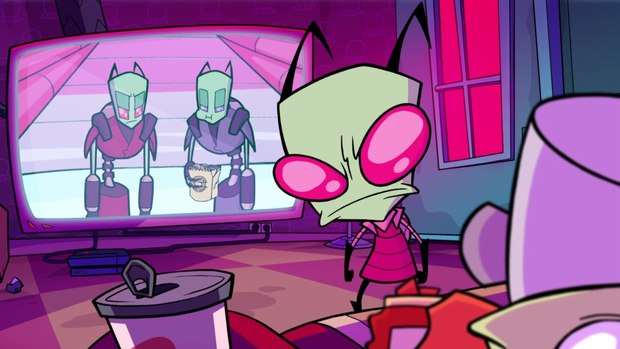 Netflix has announced that Nickelodeon and creator Jhonen Vasquez’s new animated film, Invader Zim: Enter the Florpus will debut this coming August 16. The 27-episode series, Invader Zim, originally aired on Nickelodeon from 2001-2002, and chronicled the efforts of an extraterrestrial named Zim on a mission to conquer Earth and enslave the human race. Considered a cult classic, the series won both Annie and Emmy awards. The show often ran afoul of network censors who objected to the proposed killing off of certain characters; Vasquez’s original design calling for the character of human classmate Dib to wear a trench coat troubled the network as well, which feared audiences would be reminded of the Columbine shooting tragedy.

In Invader Zim: Enter the Florpus, Zim discovers his almighty leaders never had any intention of coming to Earth and he loses confidence in himself for the first time in his life, which is the big break his human nemesis, Dib has been waiting for.

Invader Zim: Enter the Florpus is produced by Nickelodeon and executive produced by Vasquez, who also wrote the film, along with Mary Harrington. Its art directed by Jenny Goldberg, storyboard directed by Jake Wyatt and produced by Joann Estoesta.