‘Masha’s Scary Tales,’ the follow-up to global preschool series ‘Masha and the Bear,’ is produced by Russian animation studio Animaccord with 13 episodes set to launch in 2016. 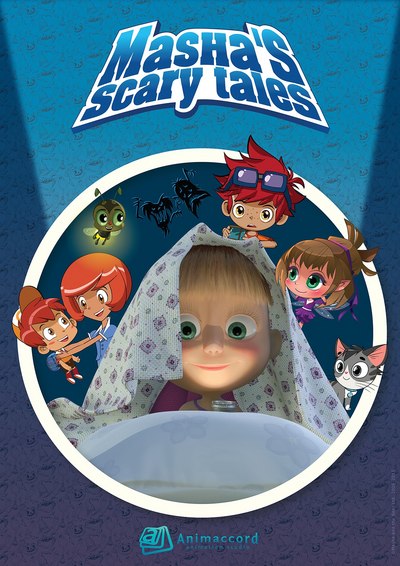 LONDON -- Ink Global has announced the forthcoming launch of Masha’s Scary Tales, a new spin-off from one of the world’s biggest kid’s shows, Masha and the Bear.

The series is the work of Animaccord, the Russian studio behind Masha and the Bear. The new series sees Masha, in her own inimitable style, showing her audience how typical childhood fears, such as being afraid of the dark and wary of water, are really nothing to worry about. Each episode features scary, but ultimately charming, characters and a score inspired by Grieg and Tchaikovsky. The first 13 episodes set to launch in the first quarter of 2016 and another 13 in fourth quarter of 2016.

The show follows on from Masha’s Tales, the first Masha spinoff, which has already mirrored the global success of the original show. Masha and the Bear is a major global hit and is broadcast in almost every country in the world via both pay and free-to-air channels. The show was named best animation in the Creative Talent category at the 2015 Kidscreen Awards. Broadcasters include France TV, KIKA, Rai YoYo (Italy), Turner Cartoonito (U.K. and Latin America), Turner Boing (Spain), ABC (Australia), Canal Panda (Spain and Portugal), Minimax (Central Europe), Russia 1 (Russia and CIS), SIC (Portugal and Portuguese-speaking Africa) and SpaceToon (Middle East, North Africa and Malaysia).

“Masha’s Scary Tales unveils new aspects of Masha’s extraordinary character to an international audience of fans,” says Vladimir Gorbulya, the Head of Licensing at Masha and the Bear, Ltd. “We have received a lot of interest from our existing broadcaster partners, so I’m sure this latest edition to the Masha pantheon will be another major hit!”

“The main idea of Masha’s Scary Tales is to dispel little children’s fears and give them a strong sense of confidence to help overcome their struggles,” comments Denis Chervyatsov, art director and director of Masha’s Scary Tales. “Just like all children, Masha knows plenty of tales and she is happy to share them with everyone!”

“Animaccord have done it again with Masha’s Scary Tales, it combines the wit and warmth of the original show with a wonderfully constructed take on fears common to little children everywhere. It’s sure to strike a chord with parents and kids alike,” adds Ink Global director Claus Tømming.