Ingenuity Studios Has a Blast with ‘Cowboy Bebop’ VFX 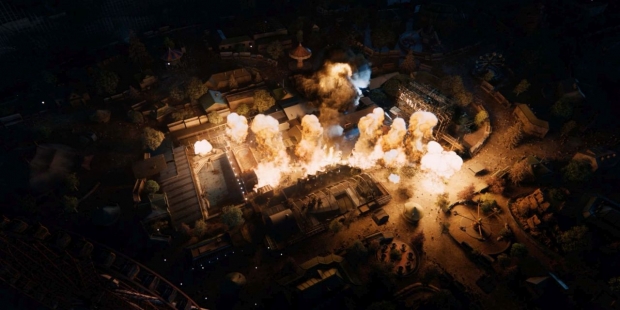 The VFX studio delivered 516 shots spanning all 10 episodes of the first (and unfortunately only) season. Produced with a variety of digital tools including Houdini, Maya, and Nuke, the work supported the story through set extensions, graphics replacement, and by adding visually compelling elements such as fire, rockets, explosions, and throwing knives to heighten the drama unfolding.

Additionally, for the big disaster shot, the Ingenuity team ensured that VFX provided a sense of urgency and action. When the spaceship is pelted by debris, and hit by an asteroid, visual effects show the damage from the impact with realistic detail.

According to Scalise, "Ingenuity Studios was a key player in helping us with the VFX on Cowboy Bebop. Ingenuity made the freighter sequence in Episode 102 extraordinary.  All the small details that they added into the destruction of the cab of the freighter really made for a spectacular and dynamic sequence. In episode 108, Ingenuity took the reins on the two biggest battles between Spike and Le Fou.  I had a lot of fun working with the Ingenuity team on this episode.  The work was amazing.”

“The ease of working with the Ingenuity Team on Bebop helped us handle the 3,000 shots we had in the show,” he added. “I loved the work that Ingenuity did on designing the construction site." Noting the studio’s role on the show grew from 100 to more than 500 shots, Barbosa shared, "We have an established working relationship and great rapport with VFX Supervisor Victor Scalise and VFX Producer Scott Ramsey, having worked with them for the past five years on projects such as S.W.A.T. on CBS and Away on Netflix. They called us in the minute they started on the series, and put a lot of trust in us on this project.”

“Our team was excited to work on Cowboy Bebop, and we made sure to watch the original anime series so that our work would be true to it,” she continued. “That was fun homework for us! We also continually looked at the original work for reference to match the look throughout."