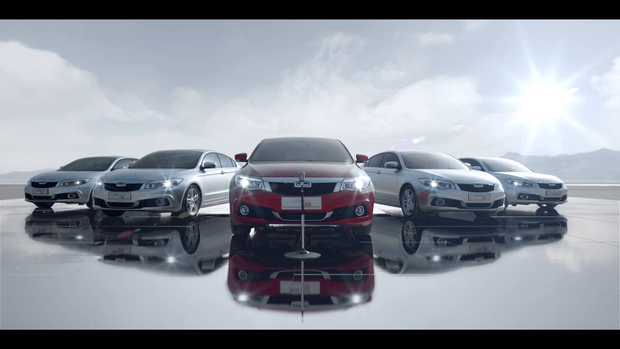 Required to produce a commercial that featured real cars and matching CG cars -- within the same frame -- along with numerous full CG shots and extensive background replacements in just one month, the Ingenuity Engine team spent two days on a shoot in the middle of the Chinese desert.

The Qoros “Dance” spot mixes the fun with the pretty, showcasing a selection of all-singing, all-dancing vehicles from the Chinese manufacturer's product line gallivanting around the desert. The spot is as effective at showcasing the attitude of the brand as it is letting the viewer know these are cars that can perform.

“The spot was filmed in rural China, about five hours west of Xining on a salt flat called Chakayan Lake, where conditions were particularly gruelling,” said Michael Lebensfeld, producer and managing director at Ingenuity Engine. “Howling winds and sub-zero temperatures made even the simplest tasks incredibly challenging. The salt flat was wet, which rendered the cars filthy after each take. At an elevation of almost 11,000 feet, pretty much the entire crew had altitude sickness.”

Once this part of the commercial was completed, production moved back to the US. With the agency and production company being China-based, a way to effectively and efficiently share, comment on and track progress was necessary. That’s where Cospective’s Frankie remote review and approval tool came into play. “Frankie played a crucial role in completing the job,” Lebensfeld said.

“We scheduled regular review sessions with the director throughout the project, so all the involved parties were tightly looped in on the spot’s progression,” Lebensfeld continued, “As the cars were completely CG in several shots, it was important to review the spot as a whole to ensure continuity in the lighting and shading of the vehicle’s surface and the surrounding salt flat.”

While the planning process for the project was unique, there was a firm plan in place for how everything would be carried out. “The director came in very early on and worked with our animators to break down the spot,” Lebensfeld explained.

The team plotted out the cars’ manoeuvres using models, and an animatic with varying options was built for each shot for the director, Joseph Kahn, to cut together and review. “He’d then provide feedback the next morning,” Lebensfeld continued, “and the process would begin again. At the end of the month, we had a full 60-second spot to present to the client.” All the planning in the world can't mitigate the unexpected, though, and the Qoros production almost fell prey to government influence. “Being browser-based, Frankie was affected by The Great Firewall of China,” Lebensfeld said. Luckily for Ingenuity, Cospective also makes cineSync, the Academy Award-winning solution for remote review and approval that’s widely used in the high security world of feature film. cineSync neatly sidesteps China’s internet filtering and it allowed the interactive review process to continue. “We then switched to over to cineSync, because we could download and host it ourselves,” he added, “The use of cineSync during that stage of the review process was extremely helpful.”

Even in the face of censorship, however, Frankie remained a constant throughout the production and a powerful, useful tool for Ingenuity to have around. As Lebensfeld explained, “Frankie served as the main review platform for both internal and external note sessions due to the ease of exporting accurate, visual directions for the artists.”

Improving efficiency and removing confusion are two things every company looks to do -- doubly so when working with external partners based in different countries. Frankie was the ideal way around those problems. “In the past, we’d get on conference calls and everyone would review Quicktimes independently,” Lebensfeld said. “We’d have to describe certain shots or cite timecodes to make sure we were reviewing the same image, and even then there was no guarantee. “With Frankie, we’re able to sync up video with clients halfway around the world, and ensure that we’re all talking about and seeing the same thing at the same time...Frankie allowed us to focus on what was important in each frame, and it really cut down on misunderstandings and confusion,” Lebensfeld said. “It's a foolproof way to review files with clients and receive feedback. Even if you’re not tech savvy, Frankie just makes it really easy to upload and share progress.”

Of course, this wasn't all achieved just with Frankie and cineSync -- Ingenuity had to take advantage of a number of other tools to make things really shine -- literally and figuratively. Additional modelling and animation was handled in Autodesk 3ds Max, with volumetric smoke added in Afterworks’ FumeFX. Rendering was handled in Maxwell, with compositing completed in The Foundry’s NUKE and the finishing touches added with Autodesk Smoke.

Even with the hardships visited on the production during its time in the desert -- and a bit of Chinese censorship -- Lebensfeld maintains it was a fun project. “It felt more like a music video than a commercial,” he said. “There were over 50 shots with a combination of real and CG cars flying through the air and zooming along the ground. Unlike your typical car commercial, you have to watch it multiple times to fully grasp what’s happening in each shot.”