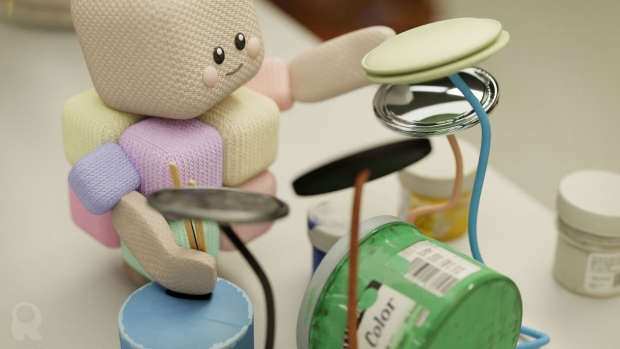 Nizam began his career as a web designer 20+ years ago before migrating to content creation using extended reality and virtual production. He has tapped NVIDIA Omniverse, a platform for building and connecting custom 3D pipelines, for his newest computer graphics-animated series, ArtSquad. The series features vibrant 3D characters who form a band, playing instruments made of classroom objects and solving problems through the power of art. “The myriad of 3D apps in my animation pipeline can sync and come together in Omniverse using the Universal Scene Description framework,” said Nizam. “This interoperability allows me to be 10x more productive when visualizing my show concepts — and I’ve cut my outsourcing costs by 50%, as Omniverse enables me to render, lookdev, lay out scenes, and manipulate cameras by myself.”

Nizam's projects usually start with pencil and paper before he takes his ideas to a drawing desk, where he creates a simple sketch, than homes in on pre-production using digital content-creation apps like Adobe Illustrator, Adobe Photoshop, and Procreate. Next, he creates 3D production assets from his 2D sketches, manipulating them in virtual reality using Adobe Substance 3D Modeler software.

“Things start to move pretty rapidly from here because VR is such an intuitive way to make 3D assets,” said Nizam. “Plus, rigging and texturing in the Masterpiece Studio creative suite and Adobe Substance 3D can be near automatic.”

Performance capture through Perception Neuron Studio brings him close to the final animation. With the extensible USD framework, the 3D assets are brought into the Omniverse Create app for rapid look development. Here character animation is enhanced with built-in hyper-realistic physics with final shots rendered in real-time. “Omniverse offers me an easy entry point to USD-based workflows, live collaboration across disciplines, rapid visualization, real-time rendering, an accessible physics engine, and the easy modification of preset simulations,” notes Nizam. “I can’t wait to get back in and try out more ideas.”

Check out how Nizam makes it happen:

Read the NVIDIA blog to get the full rundown of Nizam’s work.