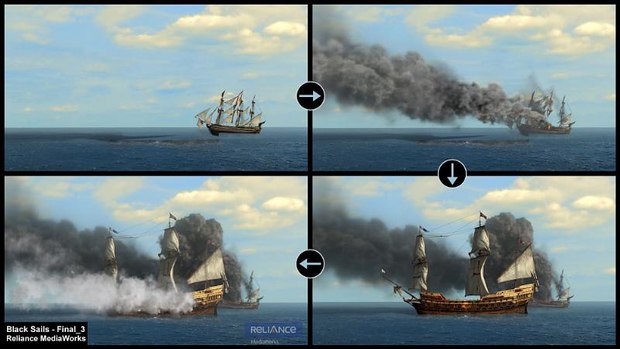 Reliance MediaWorks, the media and techno-creative solutions provider and part of the Reliance Group, has announced its association with the first season of STARZ Network’s critically acclaimed American TV Series Black Sails. The pirate period drama produced by Michael Bay has received high TRP ratings and has been praised for its quality visual effects work.

Set in 1715 during the golden age of piracy, the series focuses on the story of the feared Captain Flint who brings on a younger crewmember as they fight for survival on New Providence Island. To effectively present the plot, Reliance MediaWorks’ artists recreated several authentic pirate ships and ocean going environments that helped flesh out Captain Flint's adventurous journey.

Given that this was an episodic television series, Reliance MediaWorks had to work on a tight schedule without compromising the high quality of work required for the premium cable network.

Academy Award Winning VFX supervisor and Chief Creative Officer of Reliance MediaWorks George Murphy led the VFX team comprising of several seasoned VFX artists. Says Murphy, “Reliance MediaWorks was tasked with expanding the landlocked South African live action sets to help create a fully realized world of oceans, sailing ships and adventure. Starting with partially built ship sets staged on a parking lot, we created computer generated sail and hull extensions, and then put those into digitally simulated ocean environments.  For these split shots, extensive paint and rotoscopy was required to integrate all of the CG elements into the layers of masts, sails and rigging of the live action boat elements.  More notably, we also generated entire scenes of ships at sea and in battle that was fully CG or a combination CGI, sky dome photography and digital matte painting work to create the final framing.  We are proud of the work we contributed to help flesh out Black Sails world into a much larger reality than was possible to shoot practically shot in front of camera. The results were very successful!” Erik Henry the Senior VFX supervisor of Black Sails at STARZ said, “Last year Starz asked me to bring the same realism to their new pirate drama 'Black Sails' as I had done to the HBO period series 'John Adams'.  I was happy to dive into this challenge as long as I had the right team to knock it out of the park.  One of our key collaborators in' Season 1 was Reliance MediaWorks based out of Burbank, California.  They shared my sense that this was going to be a special show right from the start and assembled a talented team lead by supervisor George Murphy. George and the rest of his team at RMW understood the challenges at hand and took no shortcuts in its delivery. From texture & lighting to compositing they were tireless in their effort.   In George, Reliance has found a real visionary, and I am so grateful to him and all the artists at RMW for helping us bring the golden age of piracy to life like never before. I am very happy to continue our journey on Season 2 in 2014, and can't wait to dive back in.”

Naresh Malik, President - Media & Creative Services said, “The ship is definitely the soul of the show. Getting the right references from the 18th century was challenging in itself. Our team gave their creative best, from the anchor to the masts, everything was recreated to perfection.”

Says Venkatesh Roddam, CEO, Reliance MediaWorks, “Black Sails is indeed a very prestigious project for us at RMW.  The team has done a great job and we look forward to working yet again with the team from Starz, and Michael Bay."

With a good response from the viewers and a season 2 already in the making, Black Sails continues to take the viewers by storm, and literally so.