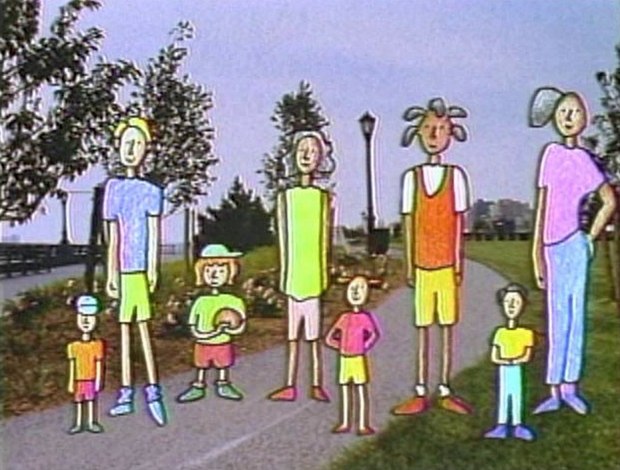 In what is sad news for the New York independent animation community, AWN has confirmed that stop-motion animator Jane Aaron passed away on June 27 from causes related to cancer. She was 67. Aaron is survived by her son, Timothy, and her husband, Skip Blumberg, one of the original founders of political collective Videofreex.

Perhaps best known for the short animated films she designed, produced and directed for Sesame Street, Aaron is an internationally recognized, award-winning animator, author and illustrator. Her independently produced films have been shown around the world in such venues as the Whitney Biennial, The Museum of Modern Art, the New York Film Festival and festivals in London, Sydney, and Telluride. The films are in many museum collections including those of The Metropolitan Museum of Art, The Hirschhorn Museum, The Walker Art Center and The Exploratorium. They have been seen on PBS, Showtime, Cinemax, The Learning Channel and on television networks internationally. Aaron has served on the jury at animation festivals in Annecy, France; Hiroshima, Japan. She was also a Guggenheim Fellow. Aaron was born in New York City on April 16, 1948. Her father, Sam Aaron, was the dean of wine merchants and a seminal figure in developing America's taste for wine from the wine establishment of Sherry-Lehmann on Madison Ave. Aaron went to the High School of Music and Art and got her BFA in Art from Boston University. Beginning of her career as an independent filmmaker, upon graduation Aaron went on to make her first film, A Brand New Day.

“[Jane] thought deeply about her films and it seemed that she had each film all figured out before she started shooting,” experimental filmmaker and CalArts faculty member Maureen Selwood writes in an email to AWN. “When she worked with someone she considered how their expertise could bring something unique to her work. She loved making films for children and her work with Sesame was very important to her. She [also] developed a working relationship with the composer Chris Cerf, who collaborated [with her] on a number of short films.”

Animator and Pratt Institute professor Robert Lyons, who animated the seminal music video for Peter Gabriel’s “Big Time,” collaborated closely with Aaron many on the short films she made for Sesame Street. They were first introduced by “Big Time” animation director Peter Wallach, who knew that Aaron and Lyons were both Bolex camera enthusiasts, and that Aaron was seeking a DP/cameraman for 5 Waltzing Chairs. “Being a Bolex owner as well, and also having a strong interest in educational animation, we hit it off immediately, and that became the start of what would be an almost two decade long series of collaborations,” Lyons writes to AWN. “A few years after our initial collaboration I came in possession of a master series Oxberry animation stand camera through Liberty Studios in NYC. As a result I now began working with Jane on her 2D animation projects as well as the stop motion ones as her technical director/cameraman.

“Jane was a master in both stop motion and traditional 2D animation at coming up with ways to make beautiful and engaging animations in any medium on the shoestring budgets that educational animation had to offer,” Lyons continues. “It was something I always admired about her and drew inspiration from, that this incredibly talented person who could likely be making lots of money doing commercial work was instead making these wonderful little educational animations for next to no money. Some of the last Sesame Street spots we worked on together were especially close to my heart. Everything was created with an eye for economy and a childlike sensibility to the creative process. Jane was one of the best, her view of the world as expressed through her animation will be sorely missed.”

Aaron is also the author and illustrator of “Sometimes I Feel...,” a series of children’s picture books about emotions (anger, sadness, jealousy, fear) published by Golden Books. HBO Family had her translate the books into a series of animated shorts, and requested that four additional subjects be included as well. She recently completed an animated series for HBO Family, Just Wondering, six shorts from original material that she wrote and illustrated.

Aaron illustrated Little, Brown’s New York Times bestseller “No More Secrets for Me,” by Oralee Wachter, based on Wachter and Aaron’s award-winning, internationally acclaimed animated film for children which offers sensitive preventative information for children on sexual abuse. The film and its companion book have been used in countless U.S. school systems and throughout the world. It was followed by “Close to Home,” another successful collaboration between Wachter and Aaron.