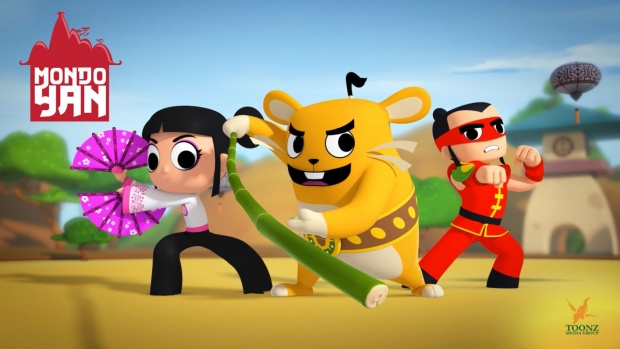 Spain-based Imira Entertainment has announced several new distribution deals for the popular animated comedy adventure series Mondo Yan. Targeted at kids ages 6-9, the series is about three unlikely heroes who have been chosen to protect their peaceful, mystical land from a power-obsessed villain and his mutant monsters. Set in two distinct, eye-catching worlds, Mondo Yan boasts of multiple backgrounds and elaborately developed characters. Using humor, the series teaches kids the value of teamwork, problem solving and the victory of good over the evil while also exploring everyday challenges that kids experience.

The CGI series (52x12’) is a co-production between Imira, TV3 of Catalunya, Telegael, Toonz Media Group and Melon Prodüksiyon, Istanbul. Imira is handling global distribution. Broadcast partners already on board include Clan TV in LATAM; Minika in Turkey; Discovery in MENA; Omri Batz in Israel; Trans 7 in Indonesia; and Astro in Malaysia. Topping off the broadcast partners area streamers Primo in US Hispanic and TTNET. While the series is already live on Primo and Minikka, TV3 will launch the show in Spain in July 2021.

“Mondo Yan is such a fun, energetic show, diverse in its characters and playing out in a wonderful universe,” commented Imira Director – Media Sales, Gulshan David. “Kids will love it and it’s also funny to draw in the parents. The creative team is stellar, developed by a top-class team from different parts of the world, including scripts written by David Lewman. We are delighted to distribute this show and look forward to adding new audiences.”

A new range of Mondo Yan branded merchandising will also soon be launched in key markets. Turkey’s Minika has a dedicated feature for the series in its monthly magazine that includes interactive elements such as games and puzzles.