Spain’s Imira Entertainment signs a deal with UK based broadcast group CSC Media for seasons one and two of ‘Larva,’ along with a special three-minute football-themed episode celebrating the World Cup tournament in Brazil. 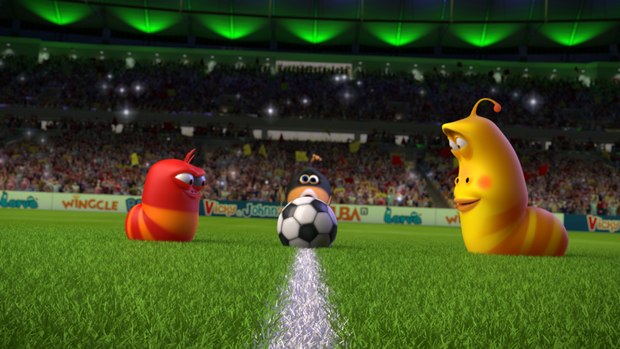 Barcelona -- Imira Entertainment has signed a deal with UK-based broadcast group CSC Media for seasons one (104 x 2’) and two (52 x 4’) of Larva, as well as a special three-minute football-themed episode which celebrates the excitement mounting ahead of the Brazilian tournament. CSC Media owns and operates 19 successful television channels across the UK and Ireland, including free-to-air Tiny Pop, POP, PopGirl, Kix, along with complementary websites, on-demand services and mobile apps.

Francesca Newington, Head of children’s channels at CSC Media Group comments: “Larva is a fantastic new addition to the Kix schedule. It’s very funny high quality animation, perfect for our target audience of boys 7-12 and it will easily appeal to a broader audience including younger kids and parents. We’re looking forward to the football special also featuring on POP, our channel for 4 – 9s which recently launched on Freeview channel 75.”

Sergi Reitg, CEO of Imira Entertainment says: “The fun and mischief in Larva is globally appealing and completely infectious, and we are looking forward to launching it in the UK with CSC Media. The company’s broad reach across both age groups and platforms is the perfect springboard for Larva, which has found fans of all generations.”

Aimed at kids and family audience, Larva is a 3D CGI series produced by Tuba n Co., Ltd. This slapstick non-dialogue comedy revolves around short vignettes from the lives of Red and Yellow, two sewer dwelling worms, who are entertained and challenged by the various items and other animals which filter through the pavement grates into their world. Yellow is the goofy, oafish friend to the more savvy Red, and together they explore their world, getting into close scrapes and having a range of hilarious escapades.