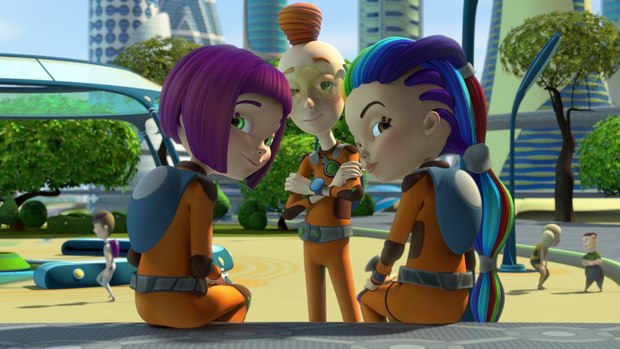 MADRID, SPAIN -- Imira Entertainment has announced the signing of several global broadcast deals and the acquisition of two key new titles ahead of this year’s MIPJr. The titles are sci-fi action adventure Alisa from producer Mirsand, as well as both the series and the feature-length film Super Abby 3D.

Imira also represents Alisa for Asia Pacific, EMEA, and Latin America. Alisa will be ready for delivery at MIPJr. Alongside these titles, Imira will be presenting the CBeebies and CBBC-commissioned Jamillah & Aladdin, a coproduction with Kindle Entertainment and Toonz Entertainment, with the first 26 episodes debuting at MIPJr.

“It's a great honor for us to work with Imira Entertainment across such strategically important territories as Latin America, Portugal, Spain, Italy, and Greece,” commented Valeria Dobrolyubova, CEO of Mirsand and producer of Alisa. “We are sure that very soon the phrase "Alisa knows what to do!" will become instantly recognizable to the international market.”

“Imira Entertainment has a long established expertise in international content distribution and we are continuing to supply global broadcasters and platforms with colorful, original content,” added Imira Entertainment CEO Sergi Reitg. “Alisa and Super Abby are fantastic additions to our line-up for the market.”

Produced by Mirsand, Alisa is based on the hugely popular book series of the same name, by renowned Russian author Kir Bulychiov. The series follows the titular teenage hero and her friends, living at the end of the 21st century. The world has changed yet the burning questions that occupied people at the beginning of the century are still pertinent today. Alisa and her friends not only battle evil and injustice but they are also concerned with global problems like the natural balance and a clean environment, both on the planet and in space. The show already airs in North America (NCIRCLE), Poland (ITI NEOVISION/ Canal +), Ex-Yugoslavia (Radio Televizija Republike Srpske), Israel (Channel 9) and Estonia (Eesti Rahvusringhääling). It’s also available across CIS on CTC TV channel (Rus), KARYSEL TV cjammel (Rus), 31 TV channel (Kazakhstan), 1+1 media group (Ukraine).

In Super Abby, Abby Careful is a very responsable, but dreamy girl, who loves reading superhero comic books. Delfin, her younger brother, is very mischievous as well as Abby’s number one fan. The Carefuls are a very nice family, although somewhat absentminded. This family’s principal characteristic is their ability to constantly get into a mess. Luckily their older daughter Abby always keeps an eye on them. When a dangerous situation emerges she lets her imagination fly and becomes Super Abby, a super heroine like the ones in her favorite comic books. Super Abby then comes to the rescue and saves her family.

Super Abby 3D is a feature film based on the popular television series of the same name. Christmas is coming but the snow falling on the town has mysteriously started to melt. Our heroine, Abby. decides to fight the League of Evil. Headed by Climatica, the League threatens to destroy the planet. This action-packed story full of humor has a positive bottom-line message,”If we all cooperate, we can save the planet.”