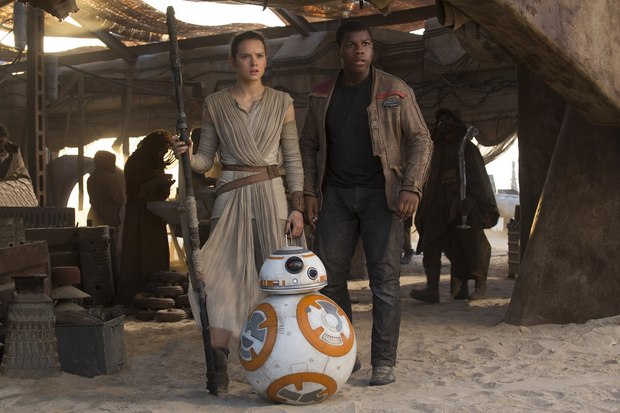 LOS ANGELES -- IMAX Corporation has announced that Star Wars: The Force Awakens, released by The Walt Disney Studios and directed by J.J. Abrams, soared to $106 million globally in just 12 days -- without the benefit of China, where the film opens January 9, following its December 27 Chinese premiere in Shanghai at a specially built temporary IMAX theatre.

Star Wars: The Force Awakens reached its box-office milestone in record pace for IMAX, supplanting previous record-holder, Jurassic World, which reached the same milestone 18 days after its release (with China). During its second weekend, Star Wars: The Force Awakens grossed $27.2 million at the worldwide box office, with $18.6 million from 391 domestic IMAX locations and $8.6 million from 282 international sites, beating even the largest opening weekend worldwide for a film without China (Marvel's Avengers: Age of Ultron, with $25.2 million).

Domestically, Star Wars: The Force Awakens averaged a stunning $48,000 per screen in its second weekend and cumulatively reached $70 million in just 11 days, outpacing Avatar, which took 30 days to reach that same benchmark.

International IMAX results for Star Wars: The Force Awakens during its second weekend were boosted by key territories ranging from Sweden to Brazil to Japan. The film has reached $36.6 million in total overseas so far.

“After achieving its historic opening weekend at the global box office, Star Wars: The Force Awakens continues to thrill audiences and break records in IMAX theatres worldwide,” said Greg Foster, Senior Executive Vice President, IMAX Corp. and CEO of IMAX Entertainment. “We are extremely proud of our contribution to this monumental release, as well as the future Star Wars installments; and we look forward to the continued global success of The Force Awakens throughout the rest of the holiday season and beyond.”

The IMAX 3D release of Star Wars: The Force Awakens was shown in its digitally re-mastered format, which includes the image and sound quality of The IMAX Experience with proprietary IMAX DMR (Digital Re-mastering) technology. The crystal-clear images, coupled with IMAX's customized theatre geometry and powerful digital audio, create a unique environment that will make audiences feel as if they are in the movie.