Creative production studio teams up with Guru Media Solutions and Nate Kaplan to launch SeePolitical, a new website designed to educate, empower and entertain voters through brief and engaging animations that can be seen anywhere, anytime, on any digital device. 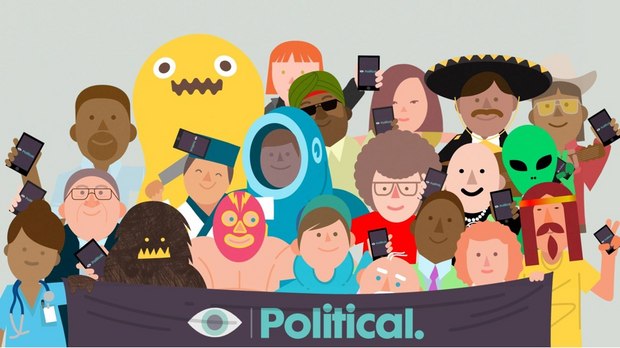 Los Angeles -- With two California state ballot propositions considered confusing to its citizens, many voters will be left perplexed and uninformed when they enter voting booths on June 3rd. To help inform California voters, Imaginary Forces, Guru Media Solutions, and Nate Kaplan, a long-time political player, have partnered to launch SeePolitical, a new website designed to educate, empower and entertain voters through brief and engaging animations that can be seen anywhere, anytime, on any digital device. The just launched SeePolitical website presents an introductory video and two additional videos that explain to voters the intricacies of ballot Props 41 and 42, just in time for the June 3 Direct Primary Elections.

In addition to the new website, a free mobile app will also allow voters to watch the proposition videos on their mobile devices and then save their answers so they can use their phones or tablets as a “cheat sheet” in the voting booth. Voters can also share their election choices via social media.

With a diverse portfolio of entertainment work across film, television, commercials, video games, digital and UX design, Imaginary Forces has crafted design-driven content for such entities as Marvel, “South Park,” “Mad Men,” “Black Sails,” Nike, Powerade and IBM, among numerous others. After recently meeting Kaplan at an event presented by the Otis College of Art and Design, IF Partners Chip Houghton and Peter Frankfurt suggested that their studio partner with Kaplan to help launch the SeePolitical organization.

“We believe that beautifully designed storytelling improves everything,” notes Frankfurt. “We have been using it for years in movies, television and advertisements to create interesting experiences. This new project allowed us to take our skillset and apply it to something that is so important in our daily lives –the act of voter engagement. This has surprisingly been overlooked for too long.”

Houghton adds, “We are extremely happy to have joined forces with Nate Kaplan and Guru Media Solutions in partnering on the launch of the SeePolitical organization. As our studio is involved in every aspect of SP, including its strategy, consumer outreach, and fundraising, we feel that we can help make a real difference in educating voters on vitally important issues at the ballot box.”

After receiving a script that was crafted by a team of political researchers, Imaginary Forces’ Creative Director Michelle Dougherty led a team of designers and animators to establish a template for the videos that would effectively explain complex ballot issues - thus bringing a new digital approach to the election. New Zealand singer/songwriter Greg Johnson was brought on board to enhance the visuals with musical tracks that would keep the heavy subject matter engaging.