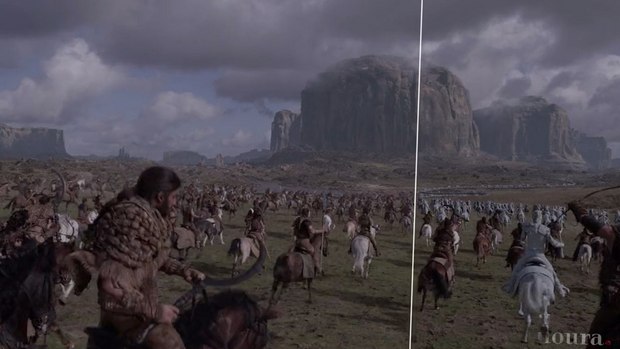 Ahead of the season seven conclusion, the action in HBO’s Game of Thrones increasingly intensified with rapidly advancing storylines featuring escalating threats, new alliances and much-awaited reunions. In episode four of season seven, "The Spoils of War," Daenerys and her Dothraki horde engaged the Lannister army in a fiery fray brought to life with help from visual effects by Deluxe's Iloura. Reteaming with VFX Supervisor Joe Bauer and VFX Producer Steve Kullback, Iloura VFX Supervisors Glenn Melenhorst and Josh Simmonds led Iloura artists in crafting the visuals. Melenhorst was recognized with an Emmy Award for VFX work on season six's "Battle of the Bastards" episode.

“We created digital doubles for the Dothraki at high resolution, knowing that we might need to drop them anywhere in a frame. This was not a case of throwing CG extras in the back of the horde, rather they are often front and center – something you’d never imagine trying to achieve in a typical TV show. ‘Game of Thrones’ is such a special phenomenon; we’re thankful to Joe and Steve for allowing us to be a part of it, and proud of the incredibly talented team at Iloura for rising to meet every challenge,” Melenhorst said.

Having honed its crowd pipeline and in-house tools for handling the enormous datasets required for large scale scenes featuring mounted riders and infantry for “Battle of the Bastards,” Iloura artists were able to draw upon that expertise in augmenting filmed elements or, in some cases, creating full CG shots, including some with thousands of soldiers in hand-to-hand combat. Iloura also created extensive set extensions as well as CG smoke and fire, and composited sequences with assets from multiple vendors to seamless effect.

“Not only did the CG smoke and fire require many terabytes of simulation data, but we also had to integrate with primary live action plates and separately shot elements, which meant massive practical and CG explosions in the same shot. Our aim was to ensure an exciting and unified sequence that stayed true to the renowned ‘Game of Thrones’ aesthetic,” said Simmonds.

To achieve the required detail and scope of the crowd work, Iloura built tools to enable custom animation for close ups and tightly choreographed action with full cloth and hair simulations. The enhancements also helped artists refine assets without having to continually rebuild, and achieve several epic aerial shots, passing through clouds of FX smoke and revealing vignettes of the battle from the vantage point of Daenaerys mounted on her dragon, Drogon, an asset animated by Image Engine. In many cases, the aerial shots, which served to provide a clear view of the unfolding stuggle below, were created from scratch using set scans and matte paintings as a base.

Game of Thrones “The Spoils of War” episode aired in the U.S. Aug. 6 on HBO and in Australia Aug. 7 on Foxtel’s showcase channel.