From a skeletal ectoplasm-spewing-monster to a Heavy Metal ghoul, Deluxe-owned VFX house helps bring some of the film’s most memorable supernatural characters to life. 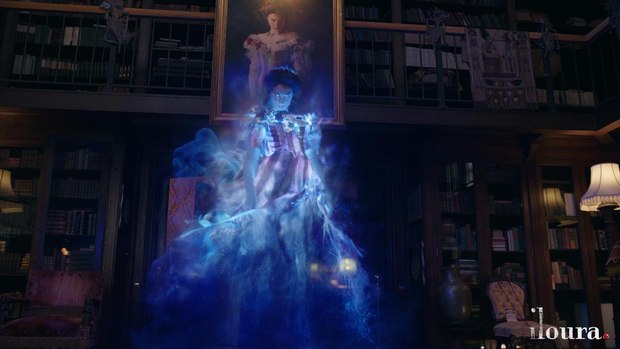 Pete Travers, Sony Studios’ VFX Supervisor for Ghostbusters, commented, “Iloura played such a strong role in the design of our ghosts. From the first test in pre-production which they hit out of the park, everything Iloura produced was not only of extremely high quality, but had such a strong aspect of creative design, in ways that we hadn't asked or expressed. They went the extra mile, and it always paid off from our vantage point. Glenn and his team made it easy on us, defining the look of our ghostly beings like Gertrude, the Rock Concert Ghost and the Mirror Ghouls.”

In a pre-production test, potential VFX vendors were required to produce an animated ghost based on what they thought the characters should look like.

“The brief allowed us quite a bit of flexibility, and we developed some designs that evoked a creepy, ethereal look and feel, but still had enough charm and personality to work for the comedic aspects of the film,” said Melenhorst.

For Gertrude, a live-action/CG hybrid (sometimes full CG) who ‘lives’ in the library, artists built a skeletal system, designed and added her clothes and lower body, and finished with a celestial aura. Production employed a technique of strapping the actors in LED lighting which threw a soft light both onto the actors as well as the set, which required artists to integrate her seamlessly into the plate. They also transformed her from ethereal beauty to skeletal ectoplasm-spewing-monster. 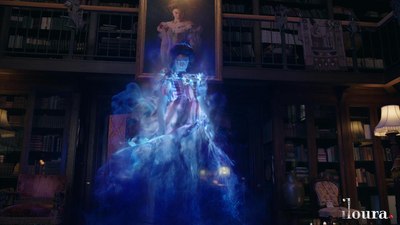 Another Iloura creation was the band of Mirror Ghouls. The filmmakers envisioned them as decomposed creatures recessed in a dark world who take on a suggestive form from afar, but become more legible as they approach the mirror surface and try to escape. To achieve this, Iloura’s artists developed a number of looks for the translucent creatures from the recessed world, as well as more creepy, human-like forms that appear close to the surface. Cooler shading and lighting tones were utilized behind the glass, which shifted to warmer tones as the ghouls approach the surface; a technique that helped inform the audience of their other-worldly environment and their relationship to ours. As the ghouls eventually smash through the mirrors and take on vaporous ethereal forms, CG warping and reflective bows were added to the mirror surfaces, as well as practical and CG smashed glass to support the physicality of the event. This kind of seamless transition was key to audience acceptance in this film as ghosts and ghouls frequently metamorphose from one form to another. Mayhem, a large and ominous all-CG ghost who inhabits a concert stadium and appears as part of a heavy metal stage show, was another Illoura creation. He needed to retain a ghostly, translucent look, but with subtle real-world detail such as skin texture and hair which needed to float and move as he flew through the air. An internal glow dubbed a “jelly pass” was added to give him an inner ghostly glow on top of his skeleton and muscle system. In some of the more complex shots, the dry-ice aura and vapor effects needed to interact with the concert crowd and the main actors to bring more believability to the scene. Further work to this sequence included CG beams, sparks and lightning from the actors’ guns, crowd enhancements and associated integration between the live-action plates and the CG work. Other characters completed by Iloura include ghost rats and the Show Ghost featured in a sequence with Bill Murray’s character.

Sony Studios’ VFX Producer for the feature, Sean Santiago, said, “I knew that when Iloura said they could do something they would, and they would exceed expectations, and despite the many, many curveballs thrown their way, Iloura continued to deliver quality work. It was an absolute pleasure working with Iloura and something I hope to repeat