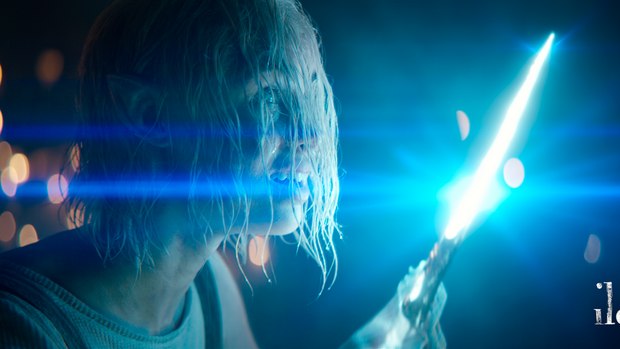 Directed by David Ayer, the Netflix film Bright features a magical twist on the classic buddy cop story, where humans work and live side-by-side with fantastical creatures in a Los Angeles rife with interspecies tension. As the lead visual-effects vendor for the urban fantasy, Iloura, led by VFX supervisor Jason Billington, helped establish the alternate reality of Bright, a gritty modern-day L.A. filled with fairies, dragons, orcs and elves. “We wanted to establish an ultra-realistic magical world, different from more traditional fantasy films,” says Billington. “Our challenge was making it feel believable yet enchanting, using science fiction for inspiration. This alternate Los Angeles could be happening while you sleep -- it’s everything you know, but with a magic vibe.”

Central to the film’s story is a magic wand, an ancient and powerful artifact that is sought by a group of gangsters, corrupt cops and powerful elves. Human LAPD officer Daryl Ward (Will Smith) and his orc partner Nick Jakoby (Joel Edgerton) stumble upon the wand and become entangled in an epic battle with the forces that are after it. During production, a practical wand was filmed on set, and artists were tasked with augmenting its appearance and supernatural powers. After multiple rounds of look development, the team arrived at a final look for the wand which consisted of a bright white tip and glowing blue core. When activated, the wand becomes a weapon, erupting with flares, smoke and a powerful pulsating aura.

Iloura also created a spectacular slow-motion collision sequence in which a vehicle crashes into an invisible perimeter created by the wand. The technically challenging shot was filmed on a bluescreen, using wires to pull the vehicle and mirror the motion of the impact. Artists match-moved the live action footage using a digital version of the vehicle and incorporated multiple layers including additional live-action plates, debris, smoke and shockwave effects. Using original photography for reference, as well as LIDAR scans and geometry of the set, a virtual environment was built to allow for an intricate 360-degree camera pan from the vehicle’s driver to the passenger in the backseat during the moment of impact. No fantasy world is complete without a cast of mythical creatures. For Bright, Iloura modeled, textured and animated a fairy and centaur to add to the inhabitants of its alternate reality world. “For the centaur, we realized early on that a human head and torso on a horse’s body looks ridiculous in most cases,” Billington says. “For a believable centaur, we had to work on the proportions and find the correct balance between the horse and human elements. Then we added digital SWAT armor to the final creature and gave the animators free reign to create its movements.” In the Bright universe, fairies are viewed as menacing pests, and when one is caught eating seeds from a bird feeder outside Officer Ward’s house, he batters and kills the creature with a broom. Having been briefed that the fairy’s movements should be reminiscent of a hummingbird, Iloura crafted the fairy from scratch, endowing the pesky creature with a body covered in tiny feathers and a degenerated face complete with scars, pimples and dirt.