Holiday season 2021 will be that much more merry and musical with the upcoming release of Illumination’s animated musical, Sing 2, the next chapter in the popular animated franchise, hitting theaters December 22. For a look at what’s to come, check out the new poster and shadow series art featuring the film’s characters and the actors who voice them. A slew of new images and artwork is shared below.

In Sing 2, can-do koala Buster Moon and his all-star cast of animal performers prepare to launch their most dazzling stage extravaganza yet… in the glittering entertainment capital of the world. There’s just one hitch: they first must persuade the world’s most reclusive rock star—played by legendary music icon Bono, making his animated film debut—to join them. Buster (McConaughey) and his cast have turned the New Moon Theater into a local hit, but Buster has his eyes on a bigger prize: debuting a new show at the Crystal Tower Theater in glamorous Redshore City.

Written and directed by returning filmmaker Garth Jennings, the film is produced by Illumination founder and CEO Chris Meledandri and Janet Healy. Sing 2 combines dozens of hit songs from pop to rock, K-pop to Latin, and from artists including Billie Eilish; Drake; U2; The Weeknd; Prince; Taylor Swift; BTS; Cardi B; Bad Bunny; J Balvin; Shawn Mendes; and Camila Cabello. 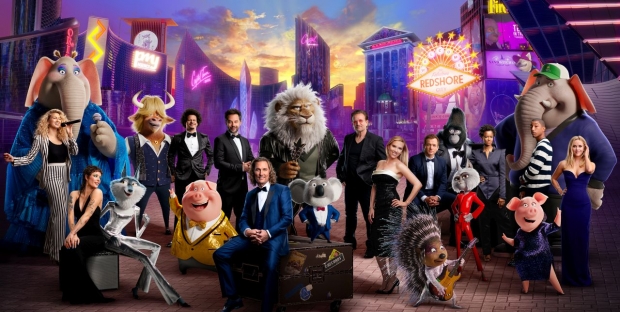