Follow-up to the hit animated comedy that earned more than $834 million in global ticket sales is set for release on June 7, 2019. 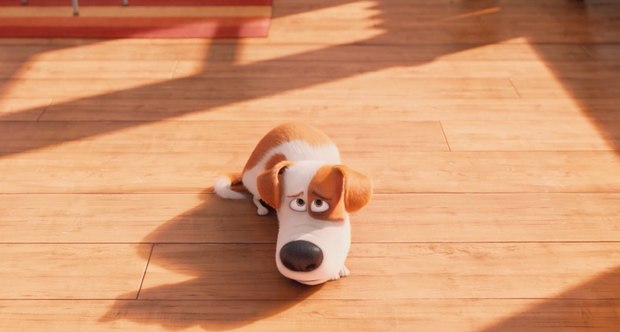 Max in Illumination Entertainment’s ‘The Secret Life of Pets.’

Amid allegations of sexual misconduct brought forth by The New York Times and other publications, Variety reports that Illumination Entertainment has dropped comedian and actor Louis C.K. from his role as Max in The Secret Life of Pets 2.

A comedy about the lives our pets lead when we leave for work or school, The Secret Life of Pets was directed by Chris Renaud (Despicable Me franchise, Dr. Seuss’ the Lorax) and co-directed by Yarrow Cheney (Despicable Me franchise). Jenny Slate, Ellie Kemper and Kevin Hart also had featured voice roles in the hit movie, which earned more than $834 million in global ticket sales. C.K. had been set to return for the sequel, which is scheduled for release June 7, 2019.

The New York Times published a story on Thursday detailing allegations from five women against C.K. Friday morning the disgraced comedian admitted the allegations against him were true in a lengthy statement, of which the first part is shown below:

These stories are true. At the time, I said to myself that what I did was O.K. because I never showed a woman my dick without asking first, which is also true. But what I learned later in life, too late, is that when you have power over another person, asking them to look at your dick isn’t a question. It’s a predicament for them. The power I had over these women is that they admired me. And I wielded that power irresponsibly. I have been remorseful of my actions. And I’ve tried to learn from them. And run from them. Now I’m aware of the extent of the impact of my actions. I learned yesterday the extent to which I left these women who admired me feeling badly about themselves and cautious around other men who would never have put them in that position. I also took advantage of the fact that I was widely admired in my and their community, which disabled them from sharing their story and brought hardship to them when they tried because people who look up to me didn’t want to hear it. I didn’t think that I was doing any of that because my position allowed me not to think about it. There is nothing about this that I forgive myself for. And I have to reconcile it with who I am. Which is nothing compared to the task I left them with. I wish I had reacted to their admiration of me by being a good example to them as a man and given them some guidance as a comedian, including because I admired their work.

Universal and Illumination released a short one-sentence statement Friday afternoon announcing that C.K. would no longer be cast in Secret Life of Pets 2. This move follows announcements from film distributor The Orchard that it would not be releasing C.K.’s movie I Love You, Daddy, and from FX that it was severing all ties with him and that he would receive no further compensation for any of the shows he produced at the network, including Better Things and Baskets. C.K. was also dropped by his agent Dave Becky at 3 Arts Entertainment’s, and his publicist Lewis Kay, as well as APA Agency, which represents his touring business.