Design agency HUSH creates an artistic and immersive way for media executives to experience the NewFront debut of ‘The New York Times.’ 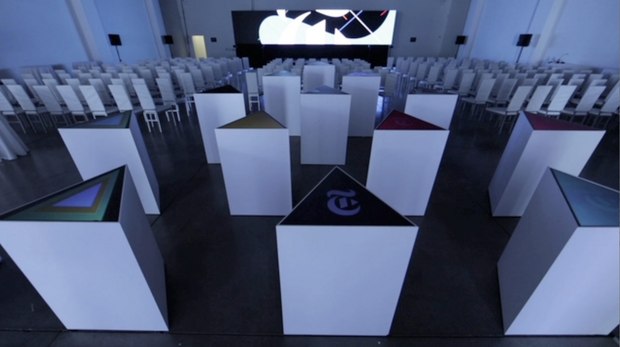 Design agency HUSH created an artistic and immersive way for media executives to experience the NewFront debut of The New York Times . The event, which took place at Dia Art Space in the West Chelsea neighborhood of New York, was conceived, designed, and produced by HUSH. The result was a diverse array of visuals, sounds, and physical structures for learning more about The Times’s acclaimed online video.

Leveraging the metaphor of “the gallery,” a place for curated, artistic expression, HUSH captured The Times’s intellectual approach to video storytelling in the modern age. HUSH created this digital playground with installations, presentations, and animation inspired by Times Video’s new “T” logo re-brand. The logo incorporates a triangular “play arrow” into the classic gothic font in order to reflect the focus on video. Guests walked through an array of triangular digital/physical plinths, each one representing one of the 14 channels of Times video. Attendees then experienced 45 minutes of dynamic audio-visuals, custom animation and editorial of cascading shapes, sounds, and abstractions of The Times’s Video logo. Everything from the stage itself to the shape and layout of the plinths to the visual graphics reflected the voice of the brand and its commitment to video. “The layout of the space needed to align with The Times brand in terms of look and feel, tonality and art direction, but also operate in a functional manner for its guests,” HUSH creative partner David Schwarz said. “It was a bit of a challenge in that respect, but the opportunity to work with such an iconic and respected brand on all facets of the project made it an extremely rewarding experience for us as an agency.”

HUSH assisted in the conceptualization and design of the space and content, and also played a central role in choreographing the event, including run of show, presentation curation, content, sound/music, lighting and location selection.