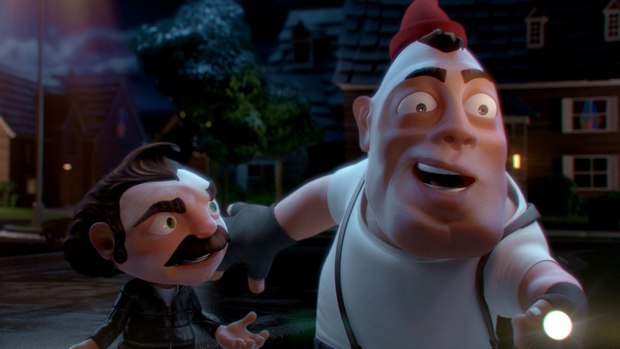 New York, NY -- The Slomin’s Shield needed a new gloss for its ad campaign, and they knew where to find it: under the humble umbrella.  One of the nation’s largest home security companies, Slomin's, Inc. has tapped humble, the integrated content studio, to create two new 3D animated TV commercials.

The spots, titled “Burglars” and “Factory,” represent humble’s first dialogue-heavy, character-driven, all-CGI ads. Their production heralds a new area for humble, as it expands beyond its live action roots to offer clients the kind of full-blown character design and 3D animation typically seen in feature films.

“Burglars” recently broke on spot and cable outlets in the New York and other metropolitan areas, and is also on Slomin’s YouTube page. “Factory” is set to break in Q1 of 2015. Slomin’s handles media buying and planning in house.

The campaign uses a comic touch to promote Slomin’s offer of free installation of security equipment when using its central station monitoring, while also touching on key features of its service like perimeter protection and interior motion detection.  Both commercials feature “Stu” and “Virgil” – the former a short, demonstrative loudmouth, the latter a big, gentle bumbler – who instantly bring to mind countless comedy duos seen in movies, TV and cartoons.

In “Burglars,” the pair is cast as would-be thieves casing homes in a darkened neighborhood, only to discover that almost all of them are protected by The Slomin’s Shield.  In “Factory,” the pair is on the assembly line making Slomin’s Shields, when Virgil asks why they have to produce so many.  As usual, Stu has all the answers.

“This campaign is an example of humble firing on all cylinders,” says President and Executive Producer Eric Berkowitz.  “It’s a demonstration not just of our creative abilities in terms of original content and our fluency in collaborating directly with advertisers, but represents a breakthrough in our capability to do high-end character design and 3D animation.  It distinguishes us from other studios in terms of our ease with working across every genre and discipline from live action to design, effects and post. We’re grateful Slomin’s gave us the opportunity to show off what we can do.”

The advertiser was attracted to humble, Berkowitz explains, based on its extensive production capabilities in live action, visual effects, animation and post, as well as its ability to create original content.  The studio has written, produced and edited shorts for such brands as FreeCreditScore.com and Jaguar on behalf of Sundance Channel, as well as for Canon and its ad agency, Dentsu.

“We saw this as an opportunity to help elevate Slomin’s brand in terms of its look and feel,” explains humble’s Sam Stephens.  “They came to us with a desire to create an animated campaign that could demonstrate the scale and scope of what they do for homeowners in ways live action just wouldn’t lend itself to.  By taking the time to fully develop our vision for Stu and Virgil, we were able to provide them with a couple of really neat characters who’ll help boost their brand equity.”

This campaign isn’t the studio’s first foray into character design. Slomin’s was impressed by the studio’s work on Tumbleweed Tango, a 3D animated short that was directed by Stephens and released last year. A Vimeo Staff Pick, it was also selected by Disney for its animated shorts web site, has screened at festivals around the world and won numerous awards.

“Design is a major part of our process,” adds humble’s Kris Merc. “We care about the quality of a narrative and its relationship to the visuals, and we wanted to communicate something here that felt fun, interesting and full of heart, and which spoke to the brand in an honest way. Using these characters as a platform to define Slomin’s brand positioning gave us a really cool chance to make something iconic and that spoke with charm and humor.”

Merc feels that while the campaign is a step forward for Slomin’s, it’s a huge leap for humble as well. “This is a statement about who we are, and about what we’re going to be moving forward,” he says. “It highlights our dedication to quality, story and design.

“It's rare for a studio that handles live action, effects and post to be able to do all of them so masterfully,” Merc continues.  “We’ve demonstrated that we can accomplish work across genres at a level that few other studios can do across the board. It’s a bold move, and it says we’re ready to step it up to a new level, to peek our heads above the clouds and see what’s next."