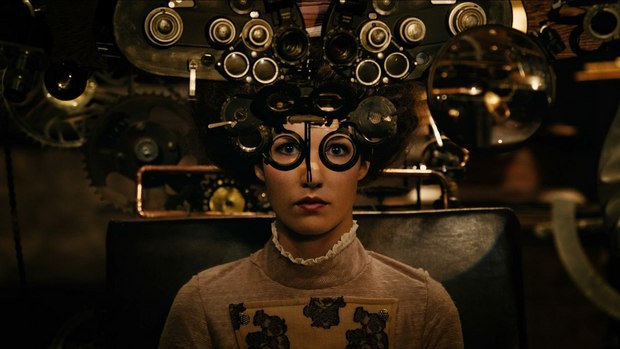 NEW YORK -- Humble and its in-house sister shop for design and VFX, Postal, recently launched a new LensCrafters campaign brought to life through intricate in-camera effects. Directed by Humble’s Nieto, through ad agency Marcel New York, the multi-spot campaign is currently rolling out in the U.S.

Each spot opens inside an optometry office from a bygone era, with patients testing their vision, trying on glasses, or having their glasses customized using extremely vintage techniques. The spots then seamlessly transition to a contemporary LensCrafters, highlighting the brand’s cutting edge tools for all things vision-related. Nieto worked closely with the Postal team, led by executive creative director Sam Stephens, starting in the concepting phase to determine how much could be accomplished in-camera. Postal completed extensive previsualization in SketchUp to fine tune the scale of the sets and props, test how quickly certain elements could be moved, and get a sense of whether all the various movements could be successfully synced. The Humble production team was then able to build out full physical sets and props for the shoot in Prague, meticulously layering the contemporary sets underneath the historic sets. The complex transitions were captured all in one take entirely in-camera; Post Supervisor Vadim Turchin was on set to ensure the success of in-camera effects. The Postal team later contributed CG work for some of the contemporary elements including digital eye measurement tools. Ultimately, the project required four weeks of pre-production, two weeks to build the sets and shoot the spots, and another three weeks of edit and post.

“It’s truly amazing what we were able to accomplish in-camera thanks to the previs process – everything from the retro eye exam props to the outfit changes,” explained Stephens. “It was really a matter of figuring out how far we could push the art direction practically and then when and how we would need to step in with CG. The final campaign looks seamless and is a testament to all the meticulous work of both the Humble and Postal teams.”

“Having both the production and post resources available in-house from day one was a huge benefit to this project in so many ways, and it really helped to effectively map out every aspect of the complex production with no miscommunications,” added Nieto. “Everyone from production designers to wardrobe puppeteers to CG artists contributed 110% for a fantastic final product.”