Yakko, Wakko and Dot return November 5 in a brand-new season featuring big laughs and the occasional epic takedown of authority figures in serious need of an ego check. 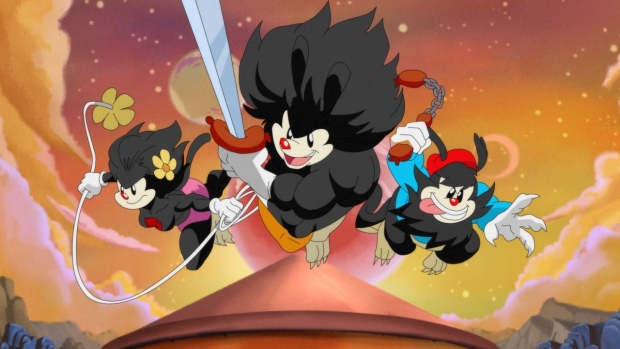 Check out the just released first look images and clip from the upcoming second season of Animaniacs, coming to Hulu November 5. Yakko, Wakko and Dot return with big laughs and the occasional epic takedown of authority figures in serious need of an ego check. Season 2 of the Emmy award-winning series is packed with enough comedy sketches, pop culture parodies, musical comedy, and self-referential antics to fill a water tower.

Fans at NY Comic Con were treated to an exclusive first look at Season 2 of during the “Hellloooo, season two! Animaniacs Voice Cast Panel” still available to watch here. Fans should also revel in the fact that the show was recently renewed for Season 3 even before the ink was dry on new Season 2 episodes. Wakko indeed!

The all-new season has something for everyone: pop culture parodies, musical showstoppers, takedowns of historical baddies...and even some important safety tips. Join the Warners and Pinky and the Brain as they wreak havoc everywhere they go, from the Warner Bros. lot to an international beauty pageant and all the way into outer space. And keep an eye out for Season 1 favorites Starbox & Cindy, as well as some rejected Animaniacs characters that were left on the cutting room floor.

Check out the first look clip: