Yakko, Wakko and Dot are back in an all-new season of the crazy popular, mostly silly animated series; all 13 episodes of the Warner Bros. Animation hit begin streaming November 5. 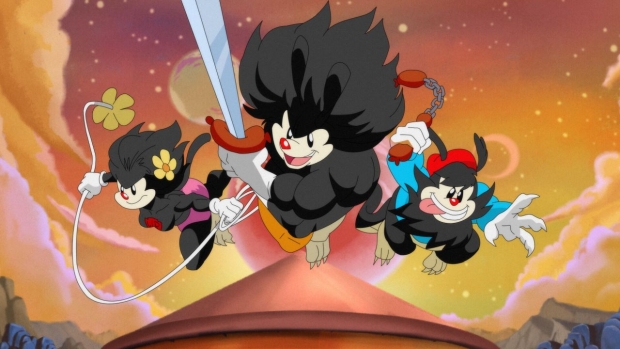 What’s better then Animaniacs? More Animaniacs! Hulu’s original series is back with Season 2, and just to get us in the mood, the streamer has dropped an official Season 2 trailer and some key art to give us a taste of what’s to come. Don’t miss Yakko, Wakko and Dots’ return on November 5 when all 13 new episodes come to Hulu – fun will be had by all!

The hugely popular reboot of the beloved Amblin Entertainment and Warner Bros. 2D animated series has found a happy home on Hulu and seems to be settling in quite comfortably. Fans should be reassured that even before the upcoming launch of Season 2, the streaming platform has given the thumbs up for Season 3.

In the new season, Yakko, Wakko and Dot return with something for everyone: pop culture parodies, musical showstoppers, takedowns of historical baddies...and even some important safety tips. Join the Warners and Pinky and the Brain as they wreak havoc everywhere they go, from the Warner Bros. lot to an international beauty pageant and all the way into outer space. And keep an eye out for season one favorites Starbox & Cindy, as well as some rejected Animaniacs characters that were left on the cutting room floor.