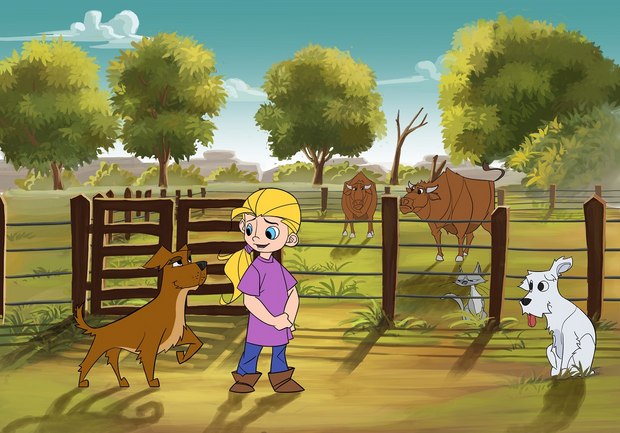 Whitestone, NY – HTC Productions will unveil its new 2D-animated adventure comedy series, HANK THE COWDOG, to international content buyers at the upcoming MIP Jr.Market. Hank the Cowdog brings the spirit of the American Wild West and the universal humor of dogs to kids around the globe.

Hank the Cowdog  is based on the award-winning, best-selling children’s book series of the same name by John Erickson that has sold nearly nine million copies worldwide. USA Today called it “the best family entertainment in years.” HTC Productions is developing the animated series in collaboration with producers Huhu Studios in New Zealand.

“The Hank the Cowdog  book series has garnered a loyal following of fans around the world, with millions of copies sold and translations into a number of other languages, including Mandarin,” commented HTC Productions’ CEO, Ralph Boral. “It features good, honest, organic knee-slapping humor that can be shared by three generations in the same room. We are excited to bring Hank and his escapades to life, delivering fun adventures and the spirit of the American West to audiences around the world.”

With a core audience kids, ages 5 to 11, the series has wide family appeal. As the self-appointed “Head of Ranch Security,” on the family-run Texas cattle ranch where he lives, the proud but bumbling Hank is joined by his canine companion, the stub tailed, chicken hearted Drover, who helps protect the ranch from Rip and Snort, the crafty and conniving coyote brothers; as well as from a bobcat named Sinister; a sly fox named Frankie, the comedic pair of buzzards, Wallace and Junior, and a multitude of other cagey (and uncaged) creatures. For all of Hank’s well-intentioned protective efforts, he still manages to get in trouble with his human owners, assisted in that regard by his arch-foe, Pete the barn cat. Pete always lands upright on his own four paws, and is equally astute at pinning the blame for anything that goes wrong at the ranch on Hank the Cowdog.

Kids will delight in helping Hank the Cowdog protect the ranch and its inhabitants while learning about the nature of animals and their relationships with humans and each other.