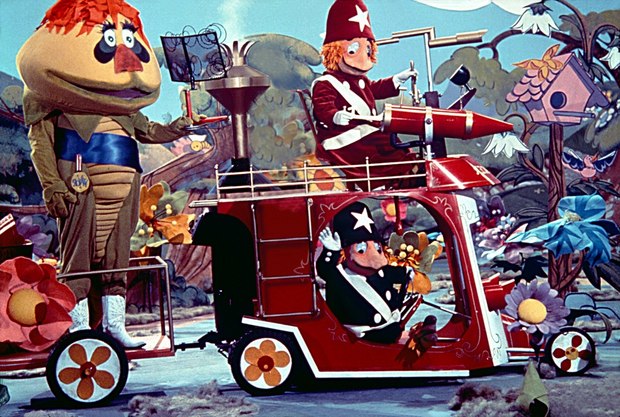 NEW YORK -- Sid and Marty Krofft’s most beloved characters from their cult classic H.R. Pufnstuf will return to kids TV for the first time in over 45 years in the Kroffts’ latest live-action preschool series, Mutt & Stuff, on Nickelodeon. Featuring H.R. Pufnstuf, Cling and Clang, Freddy the Flute and the Rescue Racer, the special is part of an additional 20 episode order that Nickelodeon has greenlit, bringing the total to 40 for Mutt & Stuff’s first season. Production on the special, “H.R. Pufnstuf Comes to Mutt & Stuff!,” will begin this fall with a premiere date set for early 2016.

“H.R. Pufnstuf was the first TV show my brother and I created, so it has always held a special place in our hearts,” said Marty Krofft. “Our fans constantly ask us to bring back Pufnstuf, and we feel the vibrant world of Mutt & Stuff is the perfect setting to revitalize these colorful characters and build excitement for new fans.”

In "H.R. Pufnstuf Comes to Mutt & Stuff!," Stuff’s favorite uncle H.R. Pufnstuf decides to visit him at the canine school. When H.R. Pufnstuf arrives with his friends from Living Island, Stuff goes overboard in an attempt to impress him and make sure everything is perfect.

Set in a unique school for dogs, Mutt & Stuff stars Calvin Millan and his dad, Cesar, star of Cesar 911 and original star of Dog Whisperer with Cesar Millan, interacting with a cast of both real dogs and puppets. Mutt & Stuff currently ranks as the number-one preschool show in its time period on all TV and the series is created and executive produced by the Kroffts (H.R. Pufnstuf, Land Of The Lost), along with Bradley Zweig. Cesar Millan also serves as executive producer. Mutt & Stuff airs regularly weekdays at 10 a.m. (ET/PT) on Nickelodeon.

“H.R. Pufnstuf’s wildly imaginative characters made an indelible impression on an entire generation, and now preschoolers and parents will get to see the two fantasy worlds of Sid and Marty Krofft come together on Mutt & Stuff through the same creative storytelling that defines both series,” said Russell Hicks, President, Content Development and Production, Nickelodeon Group.

“It has been an amazing experience to be a part of Mutt & Stuff with my son Calvin,” said Cesar Millan. “The show is an amazing platform to educate kids on the responsibilities of being a dog owner and we are excited to be bringing it back for another 20 episodes.”

Mutt & Stuff follows Calvin Millan and his best friend Stuff, a larger-than-life dog with a personality to match. They take preschoolers inside the doors of Mutt & Stuff, a school for dogs, to explore the daily lives of these canine companions. Each episode features incredible tricks, training lessons and high-spirited humor. With the help of 15 playful puppies and charismatic puppets, Calvin educates preschoolers on how to train and guide their dogs, as well as showcase the friendship and loyalty that puppies can provide. The series has a social-emotional curriculum that helps preschoolers identify and manage emotions, build interpersonal awareness and develop social skills. Mutt & Stuff also carries a message of pet adoption and responsible pet care based on Cesar Millan’s philosophies.