With features that rival Apple’s 15-inch MacBookPro, the HP ZBook Studio mobile workstation is aimed squarely at the professional market. 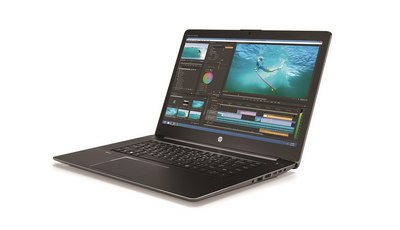 HP unveiled its latest lineup of laptops at a press event in New York City on Wednesday, including the ZBook Studio mobile workstation aimed squarely at the professional market and chock full of features that rival Apple’s 15-inch MacBookPro.

“Apple continues to abandon the professional market, and leaves a huge expansion opportunity for our business in media and entertainment, video production [and] 3D animation,” HP VP Jeff Wood said during the event.

At 18mm thick, HP's new 15.6-inch notebook is super-thin, and weighs in at just 4.4 pounds. The ZBook Studio runs on an Intel Core i7 Skylake or Xeon desktop-strength processor, with up to 32 GB of RAM and up to 2TB of storage with the HP Z Turbo Drive G2.

The new flagship laptop comes with two display options: an HP DreamColor UHD or Full HD touchscreen display. The laptop is targeted toward consumers who use portable computers to do heavy workloads, such as video editors or digital designers. It can be equipped with either Nvidia's Quadro M1000M with 2GB of its own GDDR5 memory for 4K display capable of more than eight million colors or Intel HD graphics 530. Available in December and starting at $1,699, ZBook Studio is also equipped with Thunderbolt 3-compatibility and has ports for an Ethernet cable, three USB 3.0, HDMI 1.4 and a SDXC card reader.

Both the ZBook 15 and ZBook 17 are planned for availability in January, although there’s no word yet on pricing.

Read the full press release below for further details:

The ZBook Studio represents the expertise developed over the past 30 years of HP workstation engineering excellence, HP Z DNA, and the extensive testing that went into the development of the system.

Offered with HP ZBook Workstations is the new HP ZBook Dock with Thunderbolt 3. Users can link up to 10 devices at once through ports that include Thunderbolt 3 (supporting DisplayPort 1.2, USB 3.1 Gen 2, and PCIe), four USB 3.0, RJ-45, VGA, combo audio, and two additional DisplayPorts.