Australian Hip-Hop duo and singer-songwriter collaborate on new track that takes soulful look at star-crossed lovers separated by the boundaries of heaven and hell. 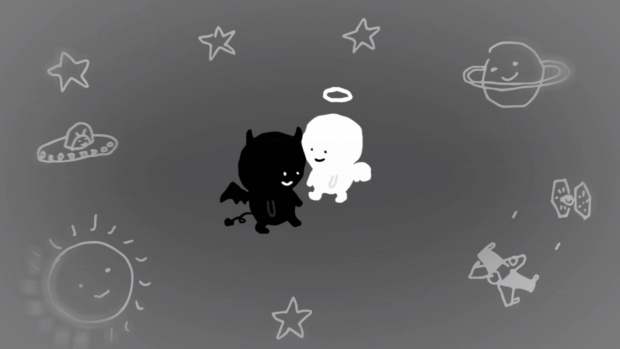 Australian Hip-Hop duo Horrorshow and singer-songwriter Ziggy Alberts have dropped a new 2D animated music video, Heaven Pt. II, in support of their 3-track EP, I Won’t Give Up, released August 21. The EP includes “Heaven Pt. II,” along with a live version of the song featuring Kim Churchill, and an Alberts cover of Horrorshow’s 2009 “Walk You Home.”

Written and directed by Horrorshow and illustrator Jason Phu, the music video was animated by Sam Horton, who also did the sound design.

MC Solo, from Horrorshow, notes, “For the Heaven Pt. II video, we wanted to give the audience a warm and fuzzy feeling to match the tone of our collaboration with Ziggy. Inspired by Jason's illustration of a crying devil character, which was inspired by my lyrics, which in turn were inspired by [Horrorshow partner] Adit's production and the evocative quality of Ziggy's original chorus, we came up with the idea of a pair of star-crossed lovers, separated by the boundaries of heaven and hell.”

Solo wanted to follow the characters through their daily grind and contrast the way that finding love with someone else, and losing it, can heighten and deepen the way existence feels. “We settled on the greyscale monochrome color palette early on as a way of exploring the underlying theme that real love is complex, and just like life itself, is rarely black and white but rather a mixture of right and wrong, 'good' and 'evil', yin and yang - forces that balance and enrich one another, making each other far more whole and complete than they could ever be on their own,” he explains.

He adds, “We're so incredibly proud of the way this video was brought to life through Jason's illustrations and Sam's animation work, and we love the way it accompanies the song perfectly.” According to Phu, “This is the first music video animation I've worked on, so a few challenges I didn’t expect were storyboarding and narrative/film transitions because I usually work in a studio by myself. I had a lot of fun working as a team.” He drew inspiration for the simplicity and “weirdness” of the visuals from David Shrigley’s animation on the Blur music video, Good Song. “The aesthetic in my practice normally looks like that; I create artwork that makes people say, ‘My kid could draw that.’”

“I loved working with Horrorshow, Jason Phu and Sam Horton on this one,” Alberts shared. “I think it's not only reflective of our collaboration but holds its own as a story. It's a spin on the classic ‘Romeo and Juliet’ theme, but with angels and devils and the yin and yang of existence. It is humorous without dissolving the sentiment of the song. I loved the modern twist of the dating app, along with traditional characters and space creatures... all in all, a total win for me!”