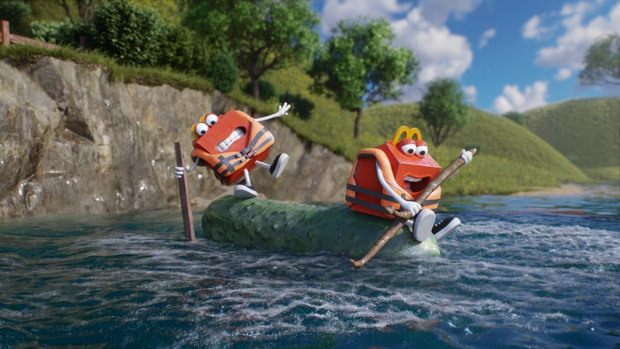 Hornet director Peter Sluszka has created another magical moment with the newest spot, Cucumber, for the McDonald's Happy Meals’ campaign out of Leo Burnett UK. Starting over a decade ago, Hornet and Leo Burnett UK, with Sluszka at the helm, have worked together to create beautifully art directed and playful films, most recently starring a few mischievous box characters called the Happys (the Happy Meal boxes brought to life).

Sluszka, who is well known for his seamless blending of techniques, art direction and mixed media work, originally directed the films with an in-camera, stop-motion and fabrication-based approach. As the campaign evolved, he was able to transition to deliver many of the campaigns with striking character-driven CG.

The latest film features two Happys as they tackle the day armed with a cucumber, ending in a hilarious fall down a very brisk waterfall. This film continues Hornet’s long-standing relationship with Leo Burnett with Sluszka leading the design and animation teams.

Sluszka and Hornet have handled a number of characters, both developed internally or already well-known, such as the Smurfs, Angry Birds and Peter. Studios, such as Sony and Nintendo, have entrusted the team to rebuild and develop their existing intellectual property. With over 100 films directed by Sluszka, the collaboration is marked by the trust and willingness to creatively push every film.

“The Happy characters are naive, impulsive, and completely blind to the potential consequences of their actions which provides fertile ground for all manner of slapstick,” Sluszka commented. “With each script we try to amplify the physical comedy and having the open communication lines and good working relationship that we do with Leo Burnett is invaluable... it helps facilitate our creative process and efficiency.”